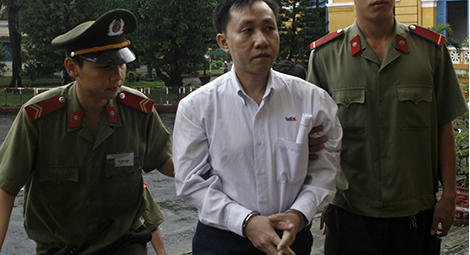 Nguyen Bac Truyen is a human rights activist from Vietnam whose actions exemplify what it means to love one’s neighbour and illustrate the importance of standing up for the rights of those of other faiths, even at personal cost.

A Hoa Hao Buddhist, Nguyen Bac Truyen has been defending human rights in Vietnam for many years. His work has involved representing those who have been unfairly deprived of their land and assisting families of political prisoners. He has also spoken up for freedom of religion or belief, providing free legal assistance to persecuted religious communities.

As a result of his work, Truyen has regularly been targeted by the authorities and in July 2017 the police abducted him. For nine months he was held incommunicado, until his trial. For six of those months he was prevented from seeing his wife, and was only granted access to his lawyers two weeks before the trial began. On 5 April 2018 Truyen was found guilty of ‘carrying out activities aimed at overthrowing the government’. He and five other activists who were on trial at the same time were handed lengthy prison sentences - his was 11 years, followed by three years under house arrest.

This is not Truyen’s first time in prison, and we know that during a previous prison sentence he endured brutal treatment by the guards that has left him with abdominal pain to this day. Despite his frailty and poor health, Truyen went on hunger strike earlier this year in protest at the treatment of a fellow prisoner of conscience Nguyen Van Hoa, a young Catholic activist. Along with other prisoners, Truyen called on the prison officials to stop abusing Hoa and release him from solitary confinement.

But to stand up for someone else’s rights when you are serving an unjust prison sentence yourself, and to take the radical decision to go on hunger strike in defence of their rights despite your own physical frailty – now that is truly a remarkable act!