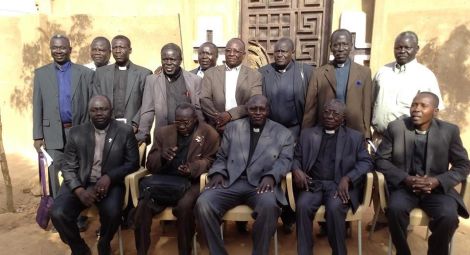 CSW has learned that criminal charges against eight leaders of the Sudanese Church of Christ (SCOC) were confirmed on 7 October, a worrying development in the continuing judicial harassment of the SCOC.

The elected president and senior leaders of the SCOC have been charged with criminal trespass and illegal possession of SCOC properties. The men were initially arrested on 23 August 2017 and accused of refusing to hand over administrative control to an unelected church committee led by Mr Angelo Alzaki and appointed by the al Bashir government.

The case against the leaders was dismissed by the court of first instance on 9 August 2018. However, the ruling was appealed, and subsequently, the Court of Appeal and the Supreme Court determined that a new criminal trial should proceed.

The case was re-opened in July 2019. Lawyers working on the appeal informed CSW that the evidence used to support the higher courts consisted of documents submitted by the Ministry of Guidance and Religious Endowments, the body responsible for registering and regulating religious organisations in Sudan.

The SCOC is a predominantly Nuban denomination and has experienced both religious and ethnic discrimination. The experiences of the SCOC mirror those of the Sudan Evangelical Presbyterian Church (SEPC), whose land has been sold to developers by a government-backed church committee which was not constituted in accordance with church procedures.

CSW’s Chief Executive Mervyn Thomas said: “We remain extremely concerned that criminal charges have been confirmed against the executive committee of the Sudanese Church of Christ. The renewal of this case is emblematic of the judicial harassment of ethnic and religious minorities in Sudan. We urge the court to dismiss all charges against the men.”

The trial comes one month after the appointment of Sudan’s new government led by Prime Minister Abdalla Hamdok. There are different ministers in post, including at the Ministry of Guidance and Religious Endowments.  In the past this Ministry discriminated against religious minorities, including by issuing a ban on the construction of churches in Khartoum and interfering with the administration of Christian denominations. However, the new Minister of Guidance and Religious Endowments, Nasr-Eddin Mofarah, has affirmed the country’s religious diversity, stating that “Sudan is pluralistic in its thought, pluralistic in its culture, in its ideologies and Islamic religious sects, and even religions.” He has also called for the return of Sudan’s Jewish community.

In a statement to the UN Human Rights Council on 25 September, Sudan’s new Minister of Justice, Mr Nasredeen Abdulbari, outlined the programme of law reform processes, which includes the creation of a Law Reform Commission that will work closely with the legislature and the Ministry of Justice. Mr Abdulbari also announced that all public order laws have been suspended and will be repealed. These laws have been used against women, especially those from marginalised communities. However, unconfirmed reports emerged on 10 October that public order police were patrolling parts of the capital, Khartoum, stopping and harassing individuals.

Mr Thomas continued: “CSW welcomes the statements issued by the new Minister of Justice and Minister for Guidance and Religious Endowments. The programme of law reforms and focus on policies and laws that reflect Sudan’s multi-cultural, multi-ethnic and multi-religious nature is to be welcomed. However, we urge the new government to ensure that high-level policy changes are also applied by all law courts and police and security officers in the country.”