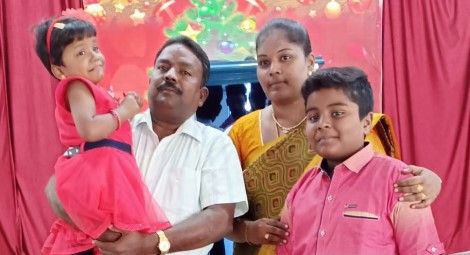 Pastor Joshua and his family

A private Christmas carol gathering on 17 December in Permuapalayam, Erode District, Tamil Nadu in India, was disrupted by five men who assaulted the people present, including a 17 year-old boy.

Pastor Joshua, who leads the Apostolic Fellowship Tabernacle, had gathered to celebrate Advent with ten others, including his wife and children aged 11 and four, in the rented house belonging to a couple from the church known as Ramesh and Sumathi.

Pastor Joshua, told a local source that the incident occurred at 8:45 pm when two men, known locally as Ravi and Elango, taunted a 17 year-old boy who was dressed up as Father Christmas for the celebrations. The men were then joined by three others who proceeded to hit the boy outside the house. When the other Christians pleaded with the attackers to stop they were also slapped and their clothes were torn.

The men then threatened to burn the Christians alive in their vehicle, referring to them as “dogs” and “pariahs.” They then pressured Ramesh and Sumanthi's landlord to evict the couple, who had been living in the house for 19 years. Fearing for his life, the landlord complied with the attackers’ demands and evicted his tenants. Reports of intolerance towards Christian activity has been on the rise in Tamil Nadu in recent years.

With no immediate access to medical attention for the wounded, Pastor Joshua sought the help of a local Inspector at a police check-post in Lakshmi Nagar on the night of the attack, however he was turned away. On 18 December, the pastor and other local Christian leaders attempted to lodge a complaint at the Chithode police station, but were met with apathy from local police officers until local human right activists intervened.

According to local sources, no First Information Report (FIR), which is necessary for the police to open an investigation, has been registered. However, a complaint has been recorded as a non-cognizable offence in the Community Service Register (CSR), which means that the police cannot make an arrest. Sources say that the perpetrators had also apologised to the Christians in order to avoid arrest and prosecution by the police, before being given harsh warning of further action by the police.

Nehemiah Christie, a local human rights defender, told CSW: “The level of intolerance that we are witnessing in this country today is unprecedented. We used to be able to celebrate our festivities without fear of opposition. The 17 year-old who was dressed as Father Christmas was not even known to these men. I believe they attacked him because he wore a costume which they perceive to be associated with a foreign religion, an outcast belief that does not belong in India. Broadly speaking, the current political leadership must be held responsible for promoting false narratives about religious minorities in this country and the venom being allowed to penetrate at the grass roots level is widespread. Even the police are complicit and do not take complaints seriously until someone intervenes. These people were fortunate as they had someone to step in on their behalf, but there are many in India who are not so fortunate where their suffering goes unheard and they continue to live in fear.”

CSW’s Chief Executive Mervyn Thomas said: “It is disheartening and deeply concerning to see that moments of celebrations are being hijacked by those who wish to plant seeds of contention and discord in India. Respect and sensitivity toward one’s right to manifest and observe their religion or belief is paramount, including during festivities. CSW urges the authorities to take appropriate measures against such thuggish behaviour and to foster a culture of respect for one another’s religion or belief.”