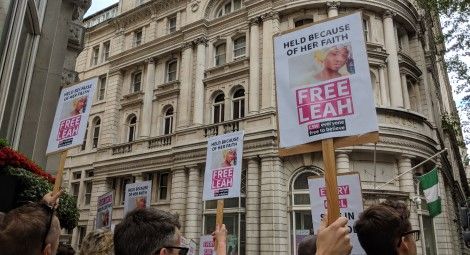 A prayer vigil will be held on 14 May outside the Nigerian High Commission in London to mark the 16th birthday of Leah Sharibu, the schoolgirl who has been held by a faction of Boko Haram for over a year after she refused to convert in exchange for her freedom.

The protest vigil will be attended by David Linden MP, who has written to the UK Prime Minister and asked her to pressure the Nigerian Government to prioritise the release of Ms Sharibu and other hostages still being held by the terrorist factions.

Writing on Twitter ahead of the protest, Mr Linden MP said: “As it happens, I share a birthday with Leah Sharibu. The difference is, I will get to spend my birthday as a free person whilst Leah remains in captivity.  We must continue to press the Nigerian Government for action on this.”

On 19 February 2018, Leah Sharibu was the sole Christian among 110 school girls abducted from their school in Dapchi by the Boko Haram offshoot, the Islamic State West Africa Province (ISWAP).  She was 14 years-old. While all of her surviving classmates were released the next month following government negotiations, Ms Sharibu was denied her freedom as she refused to convert as a precondition.

On 14 May Ms Sharibu will mark her 16th birthday in captivity. In September 2018 Boko Haram executed one of her fellow female hostages and issued a final ultimatum on her life. She was eventually spared, but only after the group executed another female hostage and declared that Ms Sharibu was to be their slave for life, along with abducted humanitarian worker, Alice Loksha Ngaddah.

CSW’s Chief Executive Mervyn Thomas said: “Tomorrow Leah Sharibu marks her 16th birthday in captivity. She has been held by this violent group for over a year now, waiting for the government which negotiated the release of her colleagues to secure her release. CSW calls on the Nigerian government to act on its promises and move decisively to secure the release of Leah Sharibu, Alice Ngaddah, and the 112 girls who were kidnapped from their school in Chibok in April 2014.”

Ms Sharibu's birthday will also be marked by a series of events in Nigeria.  In Abuja, events will be held at the National Christian Centre and Unity Fountain Park; Ms Sharibu’s denomination, The Evangelical Church Winning All (ECWA), will be holding a service at its headquarters in Jos, Plateau state, and there will also be a service at Realm of Glory Headquarters Church in Lagos.  In addition, a birthday cake cutting commemoration will take place at the United States Senate building in Washington DC.

Those who cannot attend the London vigil in person are encouraged to pray for Leah between 1 to 1:30pm, when the vigil will take place, and to join the campaign urging the government of Nigeria to do everything in its power to secure Leah’s release and that of her fellow hostages.