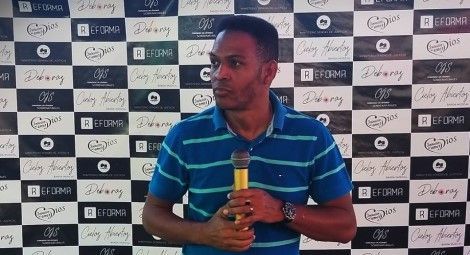 On the frontlines: Alain Toledano Valiente

‘In Cuba, pastors are more at risk than criminals and bandits’

Apostle Alain Toledano Valiente is sadly far too used to receiving harassment from the Cuban authorities. As one of the key leaders in the Apostolic Movement and leader of Emanuel Church in Santiago de Cuba, he has been subject to a great deal of intimidation and abuse - among other things, the government has refused to register his denomination. The pressure on him has increased in recent months, with those in power trying to criminalise his ordinary pastoral work.

CSW has been working on Alain’s case for almost 15 years, raising awareness of the harassment he’s experienced.

On 5 February 2016 Alain's church building as well as the pastoral home in which his family lived were surrounded by police, state security officials and members of the military. Hundreds of members of the church were detained, including Alain's wife Marilin Alaya Correa. The authorities then proceeded to demolish both the church and Alain’s family home, while his young daughters could do nothing but watch the destruction take place.

All of this happened while Alain was out of the country. Worse still, this was not the first time that Alain and his church had had to face the demolition of their church at the hands of the authorities - it happened in 2007 too.

‘They want me to stop being a pastor’

Tragically for Alain and his community, this harassment is not simply a story of the past. In July 2019 Alain was due to attend the State Department Ministerial to Advance Religious Freedom in Washington DC. This promised to

be the perfect platform from which to raise concerns about religious freedom in Cuba and call on the international community to take action. On the day of Alain’s departure he was stopped from boarding his flight by government officials who informed him that he was banned from leaving Cuba indefinitely for reasons of national security.

The targeting did not stop there. In the space of less than two months – between 1 August and 25 September 2019 – Alain was summoned to the police station an astonishing 17 times, a deliberate campaign of harassment and attempted intimidation.

True to their word, the police did indeed charge Alain with disobedience on 25 September.

‘In Cuba, pastors are more at risk than criminals and bandits,’ Alain told us. ‘I committed no crime, it had to be manufactured. My disobedience, according to them, is that I cannot meet with other pastors in the nation, I cannot carry out any religious activity; that is to say they want me to stop being a pastor.’

Despite the ever-increasing risks to his freedom and despite witnessing the complete destruction of his property on two separate occasions, Alain refuses to give into the government’s threats. He continues to preach the Christian faith and carry out his pastoral duties, ‘convinced that neither death nor life...neither the present nor the future, nor any powers...nor anything else in all creation, will be able to separate us from the love of God that is in Christ Jesus our Lord’. Romans 8:38