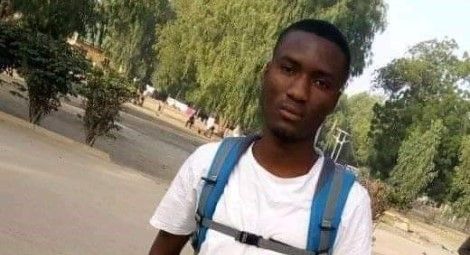 The Islamic State West Africa Province (ISWAP), an offshoot of the Boko Haram terrorist group, has released a video showing the execution on 20 January of a 22 year-old Christian student from Plateau State, Nigeria, by a minor.

Ropvil Daciya Dalep from Jing village in Pankshin Local Government Area (LGA), Plateau state, studied biology at the University of Maiduguri. He was abducted on 9 January on the outskirts of the Borno State capital along with 20 year-old zoology student Lilian Daniel Gyang, also from Plateau State. Both were returning to university following the Christmas holiday. A third person who was abducted with them was later released.

The video shows Mr Dalep kneeling as a masked child stands behind him brandishing a pistol. Prior to shooting him the child, who began by chanting in Arabic before speaking in Hausa, claims that Mr Dalep’s execution is in revenge for “bloodshed”, allegedly by Christians. The boy says: “In particular, this is one among the Christians from Plateau State. We are saying to Christians, we have not forgotten what you have done to our parents and ancestors and we are telling all Christians around the world, we have not forgotten and will not stop. We must avenge the bloodshed that has been done like this one…”

This is the second video released by ISWAP that has linked executions with both the faith and the state of origin of its victims.  In a video released on 22 September 2019 terrorists wielding AK- 47s described the beheadings of Christian humanitarian aid workers Lawrence Dacighir and Gedfrey Ali Shikagham as the beginning of “revenge on Christians in Plateau state.” They alleged that Christians from the state “kill our women and children and eat their meat.”  Both men were from Plateau state, and were members of the Church of Christ in Nations (COCIN).

Meanwhile news has emerged that prior to executing the Chairman of the Christian Association of Nigeria (CAN) in Adamawa,  Rev Lawan Andimi, on 20 January, the Shekau faction of Boko Haram had demanded £2 million in ransom and rejected an offer of N50 million (approximately £105,162).  In a statement on Rev Andimi’s murder that also drew attention to the murder on 19 January of Rev Denis Bagauri in his home in Adamawa state  by unknown gunmen, the National President of CAN, Rev Dr Samson Supo Ayokunle, challenged the federal government “to be more proactive,” in addressing Nigeria’s security challenges.

CSW’s Chief Executive Mervyn Thomas said: “We extend our deepest condolences to the family and loved ones of Ropvil Daciya Dalep. CSW is deeply concerned and saddened by the daily reports of violence against Christians in northern and central Nigeria, who are under siege from a multiplicity of armed non-state actors. We join the President of CAN in appealing for President Buhari and the government of Nigeria to be more proactive in addressing these issues.  The continuing deterioration in security clearly highlights the urgent need for a recalibration of military strategy to ensure that security forces are sufficiently resourced to combat every armed threat and to protect every citizen, regardless of creed or ethnicity.”

Elsewhere, the  children seized by the Nigerian Police and Kano state Government from the Du Merci orphanages in Kano and Kaduna on 25 and 31 December 2019 respectively have been unable to attend school since they were placed in the government-run Nasarawa Children’s home in Kano, where they are prevented from leaving the premises.  Initial reports by the state police and other authorities that the children they seized are aged between 3 and 12 have proved erroneous, as the group includes a 30 year-old female graduate, a 22 year-old man, and a married woman who is over 22 years old who was visiting the home with her new born baby.

There are worrying indications that efforts may be underway to implicate the orphanage’s co-founder, Professor Richard Solomon Musa Tarfa, in some form of wrongdoing. In a video received by CSW Nigeria, the 30 year-old woman and 22 year-old man complained of being threatened by police for staging a protest in the government home, where they stated they had been held against their will for over two weeks and wanted to return to the Du Merci orphanage.

In addition, in a broadcast by Nigerian media house Channels TV, the married former resident, who did not speak, was described by the journalist in a voiceover as having been forcibly married.  The broadcast stated that the orphanage was “a baby making factory, allegedly for trafficking,” and quoted the Kano state Commissioner of Women’s Affairs and Social Development as claiming there was “no record showing the existence of any Du Merci Children’s Home in the state.” The broadcast included a clip of the professor asserting the orphanage is duly registered, as he was being paraded before journalists alongside armed robbery and kidnapping suspects. The professor’s lawyer subsequently recorded a rebuttal to these allegations.

Mr Thomas added: “CSW continues to be deeply concerned by the ongoing detention of Professor Tarfa and at what are obvious attempts to implicate him in crimes for which he is not responsible. We are also highly concerned by reports that the children from the Du Merci centre have been prohibited from leaving their new orphanage, even to attend school. This is clearly not in the best interests of the children. We urge the Kano state authorities to release Professor Tarfa immediately and without condition, and to allow the children and the adults who were seized with them to return to the Du Merci centre and continue with their lives.”

1.                   Earlier this week CSW launched a campaign calling for the release of Professor Tarfa. More information is available here.