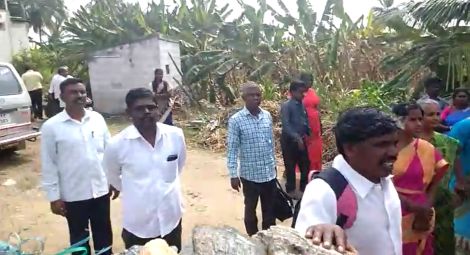 A private prayer meeting was disrupted on 18 January in Pogulur village, Coimbatore District, in India’s Tamil Nadu state. Christians at the meeting were threatened, insulted and intimidated.

As a meeting of approximately 250 pastors and their families drew to a close in the home of a fellow Christian at around 12:30pm on  18 January, eight individuals, whom local sources tell CSW are backed by Hindutva nationalists operating in the area, stormed the property. They caused a commotion and used their vehicles to block the Christians from leaving the premises.

The perpetrators demanded to see the leader and insisted that the pastors explain the purpose of their gathering. Witnesses at the incident said that the intruders had asked if the organisers had obtained legal permission to conduct the meeting in the house from the local authorities. Despite explaining that it was every Christian’s right to meet and pray and that there was no legal requirement for permission to hold a religious meeting in a private property, the eight individuals continued to harass the Christians by hurling insults and intimidating them.

Pastor Joshua, who was at the meeting, told CSW that the intruders were extremely foul-mouthed and aimed hurtful and offensive words at the group, in particular at the women who were gathered there, calling the Christians “pariah dogs who take money from white people without any shame.” Local sources said that the police were alerted and the perpetrators backed down and dispersed when they arrived at the scene.

Local human rights activist Nehemiah Christie has warned that trend of targeted discrimination, harassment and attacks on Christians in Tamil Nadu is a “routine feature all across the state.” In response to this incident, he told CSW: “State neglect and police complicity and inaction has become almost endemic as far as dealing with violations of these sort is concerned. Opposition to Christian activity often takes place during private home prayer meetings and church services or while Christian tracts are being distributed, leaving the community in state of trepidation, although Article 25 of the Constitution of India guarantees freedom to freely profess, practice and propagate religion.”

CSW’s Chief Executive Mervyn Thomas said: “CSW is deeply troubled by the impunity which emboldens non-state actors like these men to take the law into their own hands. Such encroachments into people’s private spaces should not be happening in a country which is proud to be considered the largest democracy in the world. The right to gather as a community with others to manifest one’s religion is fundamental to freedom of religion or belief, a right guaranteed under India’s constitution and the international covenants to which it is party. We urge the police to be more proactive in ending the impunity which encourages this lawless behaviour.”