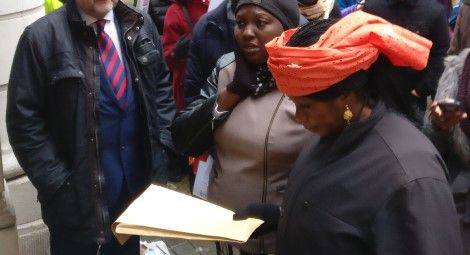 Rebecca Sharibu holding a petition outside the Nigerian High Commission

Rebecca Sharibu, the mother of 16 year-old schoolgirl Leah Sharibu, joined a protest outside the Nigerian High Commission in London, organised by CSW to mark the second anniversary of her daughter’s abduction and calling on the Nigerian government to do everything in its power to secure her release.

Leah Sharibu was the sole Christian among 110 schoolgirls abducted by the Islamic State West African Province (ISWAP) faction of Boko Haram from their school in Dapchi, Yobe state on 19 February 2018. While her surviving classmates returned a month later following government negotiations, she was denied her freedom for refusing to convert as a precondition for release.

Speaking outside the Nigerian High Commission, Rebecca Sharibu said: “Today Leah has spent two years in captivity. We don’t know where Leah is, we don't know the condition or the situation that Leah is in. I want to thank you once again for the encouragement I receive from all of you, and plead with you to continue praying until Leah is out. I'm pleading with [the UK] government and with our Nigerian government, with President Buhari... to fulfil his promises that he has made to me personally, that he is going to rescue Leah and ensure that she is released, and not just Leah, all the others in captivity.”

Mrs Sharibu, accompanied by CSW’s Chief Executive Mervyn Thomas, subsequently delivered a petition with 12,132 signatures to the High Commission, calling on the Nigerian government to take action to help Leah.

Eritrean gospel singer Helen Berhane, who spent two and a half years imprisoned by Eritrean authorities in a shipping container on account of her faith, sang Days of Elijah, while Pastor Ayo Adedoyin, the Executive Director of the International Organisation for Peace Building and Social Justice (PSJ); and Pastor Fred Williams of Spirit Life Missions prayed for Leah’s release.

In October 2018 ISWAP declared that Ms Sharibu and Christian nurse Alice Loksha Ngaddah, who was abducted on 1 March 2018 during an attack on Rann, would be enslaved for life, and that it was now “lawful” for the terrorists to “do whatever we want with them.” Most recently in January 2020 one of five aid workers released by ISWAP reported that Leah was alive and well.

CSW’s Chief Executive Mervyn Thomas said: “CSW has been outside this High Commission many times in the last two years. We've spent days and days out here. We've celebrated Leah's birthday out here on two occasions, and we will continue until we see Leah released. We will stand with [Rebecca] until we see Leah released. We believe that the Nigerian Government and President Buhari is not doing enough, in fact we don't believe they're doing anything, even though President Buhari personally promised Rebecca that he would get Leah released. That was eighteen months ago, and nothing has happened. So that's why we're here today, we're here to protest and say to the Nigerian government we want to see Leah released. We stand in solidarity with Rebecca... and we will continue to do that.” 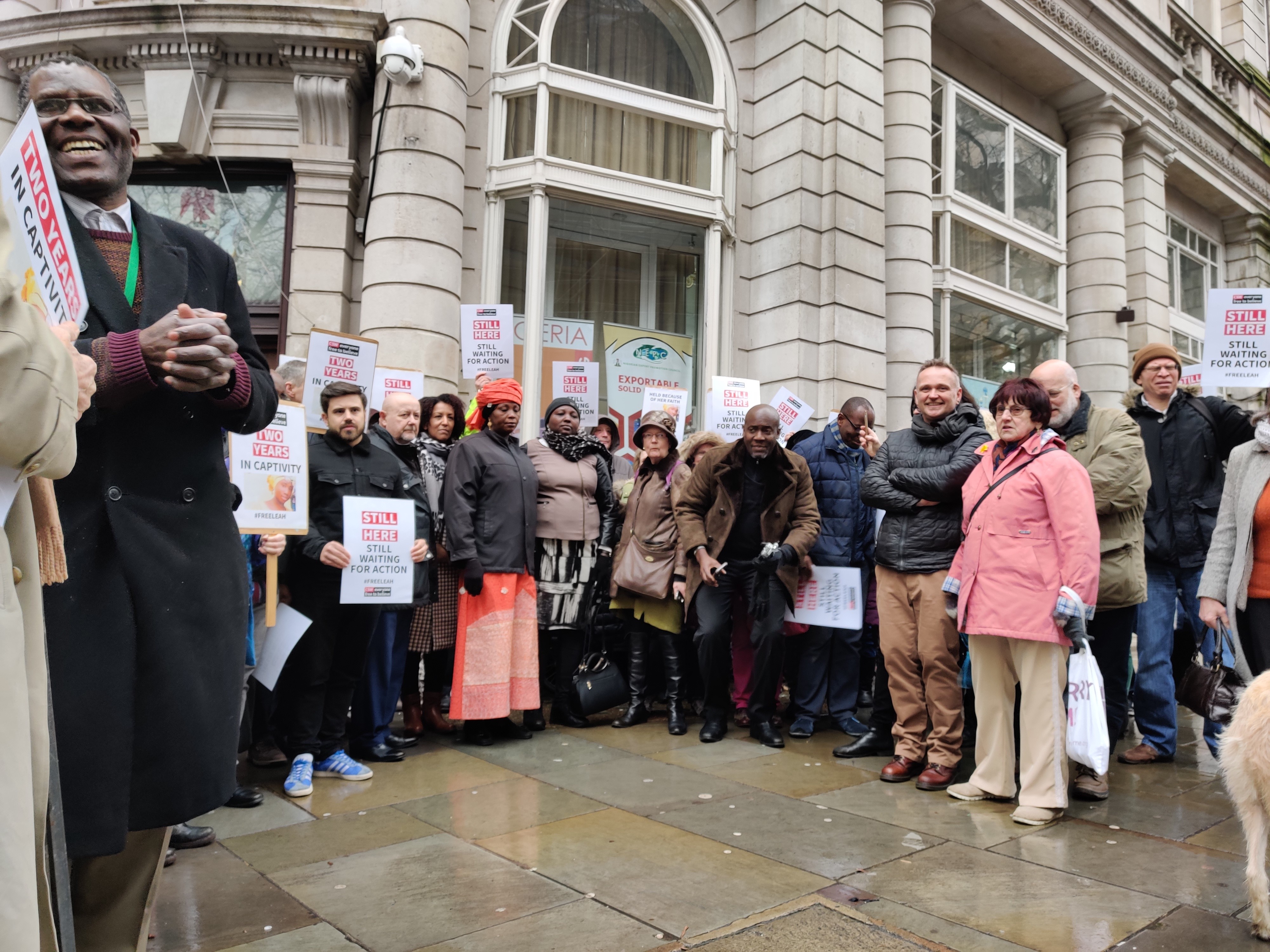 Rebecca Sharibu and other protesters outside the Nigerian High Commission. Credit: CSW