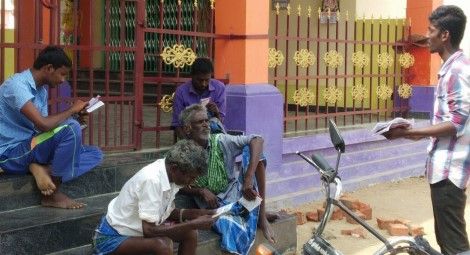 One of the Christians distributing tracts

Christians accused of 'forceful conversion' and assaulted by police

Nine Christians were beaten by the police on 21 February after being accused of ‘forceful conversion’ in the town of Sathankulam, Thoothukudi District, in India’s Tamil Nadu state.

On 18 February, Pastor Shajin from Devasabai church led a team of seven pastors from Rameswaram town to Sathankulam, where they were met by Pastor Lazar Barnabas and embarked on a four-day ministry distributing Christian literature. At approximately 9am on 21 February, the men were confronted by a member of the Bharatiya Janata Party (BJP) named Ponniah who seized their tracts and accused them of converting people by force.

Ponniah informed the local police, who arrived at the scene of the incident and escorted the pastors to the police station. Local sources report that once in the police station, police officers did not question the pastors about their activities but instead proceeded to assault the group, one of whom was handicapped.

Sources close to Pastor Barnabas report that he was severely beaten with a ‘lathi’ (bamboo baton) by Sub Inspector Raghu Ganesh while other police officers looked on, and sustained injuries to his back and legs.

On the same day, Ponniah, accompanied by members of a local Hindu ‘Munani’ (nationalist) group, registered a First Information Report (FIR) against the nine Christians for attempting to convert him by force. The Christians were held in custody until 5:30pm and only released after local human rights activists intervened. CSW sources report that an FIR has been registered against the police. Pastor Barnabas, who had initially received medical attention in a government hospital for his injuries following the assault, is currently receiving treatment in a private hospital.

Local monitoring groups have raised grave concerns regarding police brutality towards religious minorities in India. Police are often unwilling to carry out impartial investigations, which has emboldened Hindu militant groups to make false accusations against Christians.

The judiciary and local monitoring groups have also condemned police failings which contributed to an escalation in recent riots in Delhi. The riots followed a protest in the city on 23 February against the Citizenship Amendment Act, which offers citizenship to migrants from neighbouring countries, but controversially excludes Muslims. Several BJP officials made inflammatory remarks towards protesters, sparking riots involving Hindu and Muslim communities which resulted in 38 dead and over 200 injured at the time of writing. Reports of police misconduct and failure to investigate and apprehend those responsible for hate speech and other crimes have been heavily criticized.

CSW’s Chief Executive Mervyn Thomas said: “The failure of the police to conduct their duties in an impartial manner makes them complicit in ongoing violations of the right to freedom of religion or belief. Had it not been for the timely intervention of local monitoring groups who assisted in the release of these nine Christians, they would have likely been held in prison for much longer and subjected to further assault. We urge the government of India to investigate and prosecute misconduct by law enforcement, which is eroding the trust of religious minorities in the police who are meant to protect them. Tackling India’s pervasive atmosphere of impunity surrounding human rights violations against religious minorities is vital if India is to fulfil its duty to protect the rights of all citizens, regardless of their religion or creed.”

Injuries sustained by one of the Christians