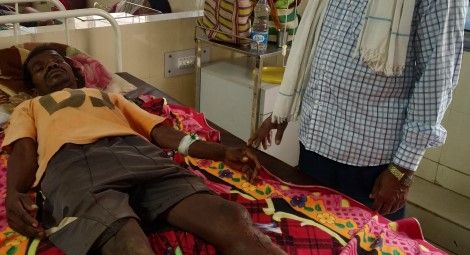 One of the victims in hospital. Credit: CSW

Three Christian families in Chhattissgarh assaulted and threatened with death

Three Christian families in the tribal village of Salepal, Bastar District, Chhattisgarh were beaten and threatened with death when they refused to participate in worship associated with the animist religion, which is practiced by the majority of villagers there.

The incident happened on 4 May when the village religious leader Dulla Poyami and several others began conducting worship on a paddy field belonging to the Christian families. When the Christians attempted to stop them from doing so, the group refused and threatened to confiscate the land, accusing the Christians of worshipping a foreign god.

Local sources report that approximately 50–60 tribal leaders forced the three Christian families to attend an open village meeting on 5 May. There the Christians were verbally abused, beaten severely and threatened with death. During the ordeal the attackers ordered the Christians to renounce their faith and return to the animist religion, but the Christians refused to do so. One of the victims lost consciousness due to the heavy beating that he had received. The crowd then dispersed, thinking the man was dead. The victims were rushed to the government hospital in Dimrapal, Jagdalpur where they received medical treatment.

The victims of the attack filed a written complaint at the police station in Kodenar, Bastar District, on 6 May. An online complaint was also filed by the perpetrators of the attack on 11 May. The three families have been expelled from the village and have taken refuge in another village for fear of their lives. According to a local monitoring group, the police have not taken any action to investigate the crime. A local lawyer told CSW that the situation remains very critical, and there is no justice in sight for these families.

CSW’s Chief Executive Mervyn Thomas said: “CSW is deeply concerned for the wellbeing of these families, who have been deliberately singled out and attacked due to their Christian faith. Clearly the families are now in a desperate need to return to their homes and agricultural livelihoods. The authorities must act without delay to investigate the matter and hold the perpetrators responsible for the attacks. The Christians must be assured that there will be impartiality in the investigation and that they will be able to continue to live in the village without fear of further discrimination and attack. Their livelihoods must be protected at all cost.”