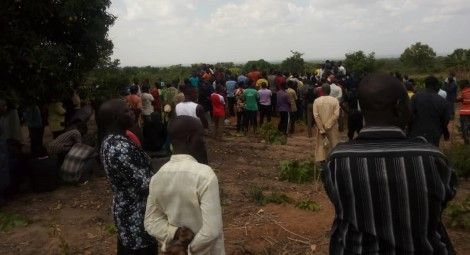 Individuals gathered at mass burial in the Gona Rogo community

Five people were killed and one was injured when armed men of Fulani origin attacked Makyali village in Kajuru Local Government Area (LGA), Kaduna state, Nigeria, in the early hours of 13 May.

Luka Paymaster, 80, Yaki Luka, 40, Francis Daniel, 37, Akilu Aruwa, 45 and Laraba Danmori, 70, died in the attack, which began at around 6.30am. The attack occurred hours after Fulani assailants had murdered a man and his wife in Katul village on the evening of 12 May. Both villages are located along the Kaduna-Kachia road, and the killings occurred despite the imposition of a COVID-19 related lockdown, and a military presence in the area.

The attacks on Katul, Idanu-Doka and Ungwan Rana-Doka occurred on the same day that victims of an armed assault by Fulani assailants on the Gona Rogo community were buried in a mass grave. On 11 May at least seventeen people were killed, six were injured, food stores were destroyed, and homes burnt during an attack on the predominantly Baptist community that began at 11.30pm.  Among the victims was the entire family of Jonathan Yakubu, 40, who was hacked to death along with his wife Sheba Yakubu, 32, and their children Patience, 13, Revelation, 6, and Rejoice, 4. Seven of the victims were minors.

According to the Southern Kaduna Peoples Union (SOKAPU) one of the survivors is a six-month old baby who was hit in the head by the bullet that killed his mother. He was initially taken to a nearby hospital, where the bullet was removed, and was subsequently transferred to the state capital for further treatment. Survivors informed SOKAPU that a neighbouring Fulani community which had been in the area for 40 years quietly left the night before the attack occurred.

These attacks are the latest in a series of coordinated assaults on Christian communities in the southern part of Kaduna state by armed assailants of Fulani origin which continue despite the imposition of a COVID-19 related lockdown.  CSW Nigeria has documented 11 attacks by Fulani militia across 5 LGAs between the time a total lockdown came into effect on 25 March, and the morning of 12 May.  38 people had been killed and around 133 houses destroyed in the attacks launched within that timeframe.

Communities in neighbouring Plateau state are experiencing similar organised attacks during lockdown.  For example, on 5 May, three armed assailants reportedly of Fulani origin, broke into the home of Rev. Bayo James Famonure, headmaster of Messiah College and leader of Calvary Mission (CAPRO) and Agape Missions, in Gana Ropp, Barkin Ladi LGA and shot him in the forehead and leg. His wife Naomi was shot in the back, and their sons Adua’a and Victor were shot in the feet. All are reported to be recovering well.

Following the attack in Gona Rogo, the Human Rights Writers Association of Nigeria (HURIWA), a civil rights advocacy organisation, called for the resignation or removal of Inspector General of Police Mohammed Adamu, and the arrest and prosecution of the Fulani assailants. HURIWA also called on the Kaduna state and federal governments to supply relief materials to survivors as a matter of urgency, and to strengthen security in Kajuru LGA, adding that ineffective action to end the attacks had emboldened the perpetrators. The organisation expressed fears of impending anarchy if no effective action is taken to end the attacks, “as the victims may be left with no option than to take the law into their own hands.”

CSW’s Chief Executive Mervyn Thomas said: “We condemn these deplorable acts of violence against innocent civilians, and are deeply perplexed they continue to occur, even in an area where security is already deployed. Almost daily we receive reports of horrific armed assaults on vulnerable Christian communities which appear to remain unaddressed. The impunity with which perpetrators are able to launch these attacks, is unacceptable. It is either a sign of an unwillingness to protect these communities on account of their religion or belief, or a telling indictment of the government’s inability to fulfil its primary purpose of securing the lives and livelihoods of Nigerian citizens.  We call on the authorities both at state and federal levels to take visible and immediate steps to protect these communities and to pursue, disarm, arrest and prosecute the assailants.  These attacks, which also occur in the south of the country, gravely threaten the unity and security of this multi faith and multi-ethnic nation at a time when Nigeria is already dealing with terrorist insurgencies, the collapsing oil price and the fall out of the COVID-19 Pandemic. If left unaddressed, they could eventually spark a conflagration that will be extremely difficult to contain.”