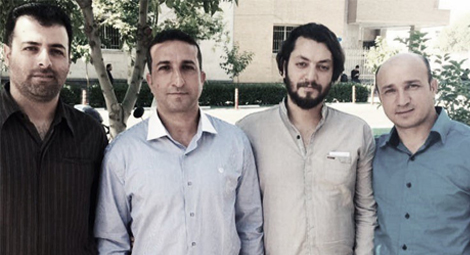 An appeal verdict has finally been received in the cases of three of the four members of the Church of Iran in Rasht who were serving ten-year sentences.

The church’s leader, Pastor Yousef Nadarkhani, and Deacon Saheb Fadaie, have each received six-year sentences. Church member Mohammadreza Omidi (Yuhan), received a sentence of 24 months, but is expected to be released in July. CSW is still awaiting confirmation on the verdict issued to Yasser Mossayebzadeh, who was convicted alongside the three men in 2017.  Their lawyer is exploring the possibilities for a further appeal.

The four Christians were initially arrested in Rasht on 13 May 2016 during a series of raids by security agents on Christian homes. In July 2017 they were found guilty of ‘acting against national security’ by ‘promoting Zionist Christianity’ and given ten-year sentences by Judge Ahmadzadeh, the head judge of the 26th Branch of the Islamic Revolutionary Court in Tehran.  Pastor Nadarkhani and Mr Omidi each received an additional two years of internal exile, which was to be served in remote and inhospitable locations in the south of the country. Judge Ahmadzadeh is accused of overseeing miscarriages of justice, and is subject to financial sanctions in the United Kingdom.

Pastor Nadarkhani was subsequently re-arrested following a violent raid on his home in Rasht by the police on the morning of 22 July 2018 while he was out on bail awaiting a summons to prison after an appeal against his conviction, and that of Mr Omidi, Mr Mossayebzadeh and Mr Fadaie, had failed in May 2018. The other men were also re-arrested in a series of raids that took place between 22-25 July 2018 and taken to Evin prison in Tehran to serve their sentences.

CSW’s Chief Executive Mervyn Thomas said: “We are deeply disappointed at the sentences delivered to Pastor Nadarkhani, Saheb Fadaie and Mohammadreza Omidi, who are innocent of the charges brought against them. While acknowledging that they have been reduced, we continue to contend that the sentences should have been dismissed altogether.  The spurious nature of these charges and the subsequent excessive sentencing amount to a criminalisation of Christianity. We call on the Iranian authorities to dismiss these charges and to release all four men immediately.  We also urge members of the international community to raise the continuing judicial harassment of Iran’s religious minority communities during  bilateral discussion with the government of Iran, to press for an end to all forms of religious persecution, and to remind Iran of  its  constitutional and international obligations to protect and respect the rights of its citizens, regardless of their religious affiliations or ethnic backgrounds.”

In a separate development four other Christians belonging to the Church of Iran denomination, Katrin Sajadpour (Saeede), Hadi Rahimi (Moslem), Mehri Behjati (Sakine) and Ramin Hassanpour, received summons from the 3rd branch of the Public and Revolutionary Prosecutor's Office of Tehran on 19 June. They were accused of spreading 'Zionist Evangelical Christianity,' and 'home church meetings' after judges Hassan Babaie and Zenjani signed a verdict based on Article 498 of the Islamic Penal Code, which criminalises the establishment of groups that aim to ‘overthrow the system.’