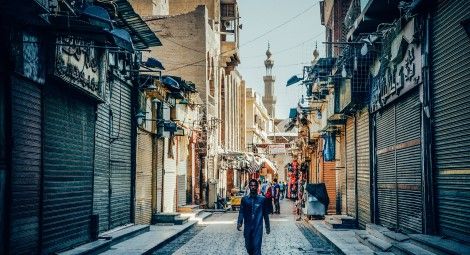 A National Security Court in Mashtoul el Souk, Al Sharqiyya Governorate, Egypt, has imprisoned two men for ‘spreading and promoting’ the Shi’a School of Islam. Mustafa Al-Ramli and Mahmoud Youssef were found guilty on 27 June, and each sentenced to one year in prison.

The two men were arrested on 16 May 2019 and were taken to an unknown location. They were referred to the State Prosecution in Mashtoul el Souk on 20 July 2019, where they have remained in detention ever since. Police agents confiscated Shi’a books and religious symbols from their homes, and they were accused of ‘illegally establishing a group to proselytise the Shi’a faith.’ The State Prosecution based its argument against the defendants on Article 98 (f) of Egypt’s Penal Code, which criminalises defaming religion and spreading extremist propaganda insulting ‘the heavenly religions,’ namely Judaism, Christianity, and Sunni Islam.

The defence challenged the State Prosecution’s failure to present any material to support its claims that the two men were proselytising Shi’a Islam. Adopting and expressing the Shi’a faith remains problematic in Egypt; those who choose to do so not only risk being arrested and imprisoned, but also face high levels of societal hostility.

In May 2019 the Criminal Court in Cairo charged Alaa Obeid, a convert to Shi’a Islam, with ‘receiving foreign funding and establishing a website and printing books promoting the Shi’a faith.’ He was sentenced to 15 years in prison and received a fine of 500,000 Egyptian Pounds (approximately £25,000).

The situation of freedom of religion or belief (FoRB) in Egypt remains concerning. While there have been some improvements, particularly with regard to the granting of permissions for church construction, periodic sectarian attacks continue to occur, particularly in Upper Egypt.  There is also a lack of legal clarity regarding the status of other non-majority faith communities, while members of these faith communities and atheists are often charged with blasphemy.  On 21 June atheist blogger Anas Hussein appeared before a court in Alexandria charged with ‘defaming religion and the misuse of social media and managing a Facebook page for Egyptian atheists.’ He was sentenced to 3 years in prison and received a fine of 300,000 Egyptian Pounds (approximately £15,000).

CSW’s Chief Executive Mervyn Thomas said: “CSW is concerned by the sentencing of Mr Al Ramli and Mr Youssef.  The charges against them indicate a continuing crackdown on specific religious groups. The peaceable exercise of the right to freedom of religion or belief should be encouraged, and the Egyptian government must uphold and fulfil this right for all of  its citizens, while addressing the social hostility to diversity that poses a very real threat to peace and unity. We urge the Egyptian government to immediately and unconditionally release these men and all others who are currently detained on excessive charges relating to their faith or lack thereof. We also call upon Egypt, as a signatory to the International Covenant on Civil and Political Rights, to lift all restrictions imposed on freedom of religion or belief, and to respect the right of its citizens to follow a faith of their choosing, or to adopt no faith at all.”

1.       The case involving Mustafa Al-Ramli and Mahmoud Youssef is case 154/2019 at the National Security Court in Mashtoul Alsouq.