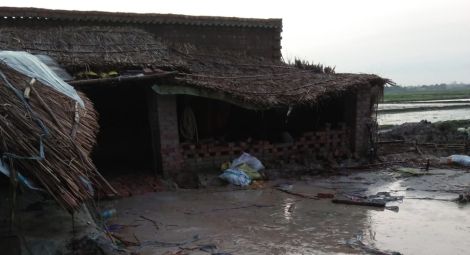 Two Christian families from Dassmora village, Azamgarh District, Uttar Pradesh, were forced to flee their village on 4 July, leaving their homes and livestock behind amid fears for their lives.

Christians in the village began to experience harassment on 2 July, when a mob of about 35 villagers entered a prayer house in the village, which was built by Sunita Maurya and Akhilesh Kannaujia in 2018, and verbally abused the people who were in the property at the time. According to a local source, about 500 people from neighbouring villages used to visit the home for prayers.

The following day, the same mob broke into the prayer house once again and ransacked it, assaulting the prayer house’s pastor, Vikas Gupta. The mob threatened to rape and murder those gathered there, and to burn the house down if the Christians did not leave the village. Pastor Gupta was then dragged to the local temple shrine where he was forced to bow before an idol and made to promise not to seek police help in the matter. The victims did not register a First Information Report (FIR), which is required for the police to open an investigation, due to fear of the threats they received. According to a local source, the victims experienced more harassment and threats on the night of 3 July.

On 4 July the mob attacked the prayer house once again, tearing down the walls, breaking windows and doors, and destroying Mr Kannaujia’s motorcycle. Following this third attack, the Christians informed the Bardah police station about the incident.

The police arrested five men in connection with the attack, however the villagers attacked the prayer house again in retaliation. According to local estimates, the villagers caused about 2 Lakh Rupees (about £2,000) in total property damage. A mob of 100 people then went to the Bardah police station and demanded the release of the men who were in police custody. According to a local source, the police were forced to release the men. The two Christian families living in the village took refuge in the police station that day until about 1am before relocating to an undisclosed location to seek shelter. On 5 July the police arrested five unidentified people, and a local source informed CSW that a FIR has been registered against them.

CSW’s Chief Executive Mervyn Thomas said: “We are deeply concerned by the repeated attacks these families have had to endure. They have lost both their livelihood, and their fundamental freedom to worship. We urge local police to properly investigate the matter and bring the perpetrators to justice. We call on the authorities to take corrective measures to ensure these families are able to resume their way of life and support the faith of other Christians in the surrounding villages.”