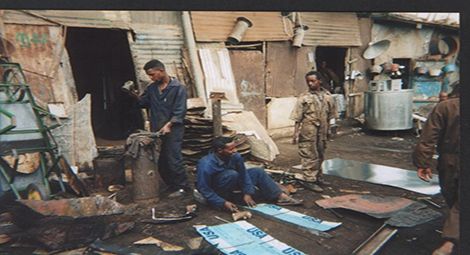 Arrests at Christian gatherings amid concerns of increasing food insecurity

Reports have emerged of the arrest and imprisonment of 45 people at Christian gatherings in Eritrea’s capital city, Asmara, in April and June 2020.

15 Christians were arrested as they attended a worship service in a home in the Mai Chehot area of Asmara in April. They were initially detained in a local police station for several days, before being transported to Mai Serwa Prison, which is infamous for its inhumane conditions.

A second group of 30 people, which included some non-Christians, was arrested at the wedding of a Christian couple during the last week of June. This group was reportedly taken to the Second Police Station, known locally as Kalai Medeber, according to the NGO Release Eritrea.

The detentions come amidst increasing concerns about the potentially deadly impact of any outbreak of COVID-19 in Eritrea’s extensive and overcrowded prison system. Tens of thousands of Eritreans are currently detained without charge or trial in life threatening conditions in more than 300 sites across the country. Among those incarcerated are prisoners of conscience, some of whom have been detained for decades on account of their political views or religious beliefs. Conditions in these facilities are unsanitary and unsatisfactory; detention facilities include shipping containers, underground cells, and the open air in the desert, and access to medical attention is insufficient and often withheld as punishment.

Dr Berhane Asmelash, Director of Release Eritrea, told CSW: “The government will excuse these arrests by saying these people are detained for breaking COVID restrictions.  But the reaction is very heavy handed. Why detain them in such conditions; why not fine or warn them?”

Dr Berhane added: “Eritrea’s entire prison population is estimated at 48,000. There is insufficient food and due to the lockdown, people cannot take food to family members in prison, because there is no transportation and they are either confined to their houses or local areas. Prisoners are suffering because they cannot get food from their families. The president is using COVID-19 to raise funds, but people in Eritrea are starving – there is no food, there is no money.  There is nothing.”

During a statement to the Human Rights Council on 30 June, Elizabeth Chyrum, Director of Human Rights Concern – Eritrea, highlighted that “Eritrea has no welfare system, and while over 2 million people have no food to eat, the government is forcibly collecting money from its citizens to fight the virus,” and urged the international community to “wake up to the alarming situation in Eritrea. Starvation is widespread and impending disaster will unfold if it is not addressed immediately.”

The Red Sea Afar Human Rights organization (RSAHRO) has also warned of severe food insecurity in the Southern Red Sea region, which has been exacerbated by government actions.  In a statement issued on 30 May, the RSAHRO accused the Eritrean authorities of “systematically starving the local people under the pretext of protecting the population from Covid-19.” The statement claims that despite being notified by local traditional leaders of the risk of starvation in the area at the beginning of April, during April and May the government intercepted and confiscated five caravans bringing food to the area, while naval forces intercepted and arrested locals who attempted to fish, confiscating their boats. Additionally, the government had removed patients from Assab Hospital at the end of April and closed all of the health facilities in the region, without providing masks, gloves “or any other first aid,” or establishing any quarantine centres.

CSW’s Chief Executive Mervyn Thomas said: “It is clear that the Eritrean government views the COVID-19 lockdown as a means of increasing its already pervasive control of society. Instead of supporting its citizens during this difficult time, it is extorting their finances, reportedly preventing the flow of food to malnourished communities, and has even closed down health facilities in the Southern Red Sea region. These closures, along with the 2019 seizures of Catholic healthcare centres, have deprived the most vulnerable of access to medical assistance during an unprecedented global pandemic. We also remain concerned for those currently detained in Eritrea’s overcrowded and insanitary prisons, including those recently arrested.   We continue to call for the immediate and unconditional release of every prisoner of conscience, and of low-risk and vulnerable detainees in light of the COVID-19 pandemic. We also urge the UN Human Rights Council (HRC) to ensure continued monitoring of the country’s deteriorating human rights crisis by renewing the mandate of the Special Rapporteur on Eritrea.”