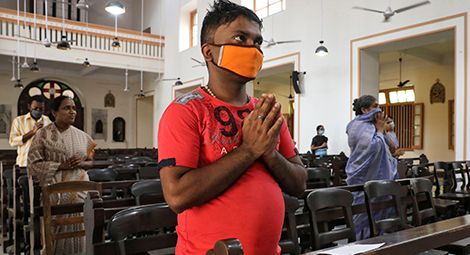 There is no lockdown on persecution

‘The harsh reality since the pandemic is the severe suffering that the masses of poor and migrant workers are having to endure. Another reality is, despite the lockdown, religious minorities continue to be harassed, discriminated against and attacked. There is no lockdown on persecution…’

This was the message from Nehemiah Christie, a Christian human rights defender in India, when we asked him how the COVID-19 pandemic was affecting the country’s religious minorities. Grave and repeated violations of freedom of religion or belief continue to rise steadily every year.

‘As Christians, when we see Muslims being attacked and killed, that worries us a lot. We want to protect our brothers – not just the Christians, but those of other faiths too’

‘They chose my name Nehemiah, but I never knew that I would be a real Nehemiah building the walls of Jerusalem to protect the churches and the victims in India’

Joining ‘online church’ has become commonplace for many of us in recent months. India is no exception to the move to ‘virtual’ church, with larger churches also live streaming services.

However, our church leaders are not interrupted by the police in the middle of their sermons or while praying. Nehemiah informed us, ‘In one instance, a pastor of a church of about 15,000 members was interrupted by the police and taken away while live streaming his Sunday message. There have been several other incidents of Christian homes being broken into by mobs, where families were beaten and taken to the police station because they were praying…’

Christians arrested and charged for providing aid to those in need

Many of us wouldn’t think twice about helping a neighbour in need, especially at this time, but for some churches and church leaders in India an act of kindness has resulted in false allegations and arrest. Sadly, we’ve learned of isolated incidents of Christians delivering aid to those in need and being falsely accused of conversion. Most recently we heard that a church leader and church members were falsely accused by local police of violating the lockdown, when in reality they were making up relief packages for the poor.

As you may have seen in the news, India's Muslim community has been blamed for spreading the virus, with claims that it’s a conspiracy to commit ‘corona jihad’. The hate speech has turned violent in many parts of the country. We’ve heard cases of Muslim women about to give birth being turned away from hospitals, and Muslims who were distributing aid to migrant workers trapped by the lockdown being beaten by local leaders of the BJP (the ruling political party). Nehemiah told us of one incident where ‘a Muslim vegetable seller was accused of “doing jihad” and beaten just because he was selling vegetable[s]’.

He expressed his shock and sadness at seeing what is happening in his country: ‘I am appalled that despite the lockdowns, non-state actors are emboldened to take things into their own hands. They are not afraid of the law and the authorities, because they see this as a service to the nation.

The pandemic is revealing the reality of the hatred that is prevalent in our society for the world to see.’

But as long as there are people like Nehemiah honouring the biblical injunction to speak up for victims of injustice, there is hope. Together we will work, campaign and pray so that justice will prevail.

Watch our Faith in Extraordinary Times interview with Nehemiah.

Send a message to encourage Nehemiah.

Write to him at the address below: