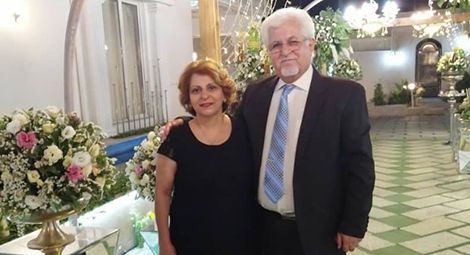 The couple were summoned to attend several appeal hearings which were cancelled by the authorities for a variety of reasons. The most recent, scheduled for 1 June, was cancelled without a reason being given. According to Article 18, a non-profit organisation dedicated to the protection and promotion of freedom of religion or belief in Iran, the pastor’s lawyer called him on 19 July to inform him that his appeal had been rejected and no further appeals were possible. Meanwhile, Shamiram Isavi was informed on 11 August that she was to report to Tehran’s Evin prison by 16 August to begin her sentence.

The couple’s son, Ramiel, was released from Evin prison on 27 February, days before the end of his sentence, due to an outbreak of COVID-19 in the prison. He had received a four-month sentence after being arrested while on a picnic with four other Christians.

CSW is deeply concerned by the spread of COVID-19 in Iranian prisons, and the plight of prisoners of conscience who remain detained.

Yasser Mossayebzadeh, who is serving a ten-year sentence on charges of ‘acting against national security’ by ‘promoting Zionist Christianity’, was one of 12 prisoners on Ward 8 in Evin prison to test positive for COVID-19 last week, and is said to be gravely ill. Nasser Navard Goltape and Saheb Fadaie have reportedly displayed symptoms of COVID-19, but according to CSW’s sources, have not tested positive for the virus. Mr Goltape, 59, is being kept in a crowded cell despite suffering from a fever for the last week.

Pastor Yousef Nadarkhani, who is also imprisoned in Ward 8, is believed not to be showing symptoms but remains at risk due to the outbreak in the ward. It is unclear whether or not he has been tested.  Mohammadreza Omidi, who was arrested and sentenced with Pastor Nadarkhani, Mr Mossayebzadeh and Mr Fadaie, remains in prison despite having served the entirety of his sentence.

Conditions in Ward 8 are over-crowded and there is inadequate medical care. Social distancing is not possible and insufficient protective measures have been put in place by prison authorities.  A group of prisoners reportedly staged a sit-in at the prison on 10 August to protest the inadequate protection measures and medical care. On 31 July Amnesty International published leaked official documents which revealed that the Iranian authorities had ignored pleas from senior prison officials for additional resources to address the spread of COVID-19 in the prison system.

CSW’s Chief Executive Mervyn Thomas said: “Pastor Bet-Tamraz and Shamiram Isavi are innocent of the charges brought against them, but like other Christians in their position, they have been convicted for exercising their right to freedom of religion or belief.  CSW urges the Iranian authorities to end the effective criminalisation of Christian practices, to dismiss these charges and to release all who are detained on account of their religion or beliefs.  We also urge members of the international community to raise the judicial harassment of Iran’s religious minority communities and human rights defenders during  bilateral discussions with the government of Iran, and to press for the release of prisoners of conscience in light of the pandemic and an end to all forms of religious persecution. We also urge them to hold Iran to its constitutional and international obligations to protect and respect the rights of its citizens, regardless of their religious affiliations or ethnic backgrounds.”