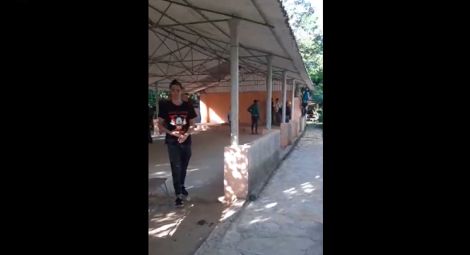 Religious leaders under pressure to sign agreement regarding church demolition

Cuban authorities in the city of Santiago de Cuba are pressuring religious leaders to sign an agreement regarding the demolition of their church. The Assemblies of God church, led by Pastor Faustino (Fausto) Palomo Cabrera, located in the Abel Santamaria neighbourhood of Santiago de Cuba, was demolished by authorities on 30 October.

The demolition began at approximately 7.30am when Cuban State Security, accompanied by heavy machinery including bulldozers, attempted to clear the area. According to Cuban independent journalist Ricardo Fernández Izaguirre, the church belongs to the legally recognized Assemblies of God denomination. Footage of the demolition has emerged on Facebook.

During the demolition, Pastor Alain Toledano, a prominent leader of an unregistered denomination, the Apostolic Movement, was physically apprehended by the police whilst filming the attack. He was taken to the Motorizada Police Station, where he was held alongside two other members of his church, Adrián Arza and Félix Daniel González, incommunicado for nine hours.

CSW’s CEO Scot Bower said: “Cuban authorities demolished a church building belonging to a registered denomination, and are now attempting to pressure Pastor Palomo Cabrera and Superintendent Martínez into agreeing that the destruction was carried out legally. They are doing this in order to give the impression that this is not a violation of freedom of religion or belief (FoRB). CSW has been monitoring this case for more than five years during which the church has been consistently targeted and the building’s demolition is indeed a FoRB violation. We call on the authorities to cease all harassment of Superintendent Martínez, Pastor Palomo Cabrera and members of their church and denomination, and to ensure that they have the right to manifest their religion in public and in community with others – an essential component of this right. We further call on the Cuban government to reimburse the church for their loss so that they can rebuild their place of worship.”