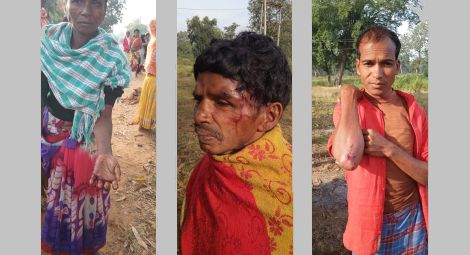 Some of the injuries sustained by members of the tribal community in Singawaram village. Credit: CSW

An estimated 100 Christians from the tribal community in Singawaram village, Sukma District, in India’s Chhattisgarh state were attacked in the early hours of 25 November.

The Christians had gathered on the night of 24 November to organise festivities for the Advent season, and to celebrate a traditional ceremony marking the birth of a child, who is now six months old.

Although the exact circumstances leading up to the attack cannot be verified, CSW sources report that a mob of around 50 people armed with homemade weapons had attacked the Christians during the night while they slept. The mob burnt Bibles and damaged motorcycles belonging to the Christians. They also accused them of destroying the local culture of the people by introducing foreign religions. It is believed that the incident took place between 12am and 2am.

Police arrived at the scene of the incident to document what had happened on the morning of 25 November at approximately 7am. According to the Chhattisgarh Christian Forum (CCF) around 27 people were injured and required medical attention at the local hospital where a Medico-Legal Case (MLC) was registered. The police have arrested 16 suspects, and a First Information Report (FIR), required for the police to proceed with an investigation, has been registered.

The CCF reported the incident on Facebook on the day it took place. However, the next day on 26 November, three police officers arrived at their office and escorted CCF President Arun Pannalal to the Police Station Mowa in Raipur.

Mr Pannalal said: “I was made to sit there for about five hours. It was at about 10:30pm where they forced me to write an apology on Facebook saying that our description of the incident was false. They said that my actions would bring a bad reputation to the state government and that my post as the CCF President will bring about communal disharmony. They threatened that if I refused to do what they say [sic], they will charge me under non-bailable section of the Criminal Procedure code and put me away. They also made me give a written undertaking that I would not report such incidents in the future. We’ve noticed that there is a pattern in the non-responsiveness of the state government and the police to these attacks. I am only highlighting violations against the people based on verified information.”

There are approximately 15 families in Singawaram village who embraced Christianity in 2008. However, no religiously motivated incidents have occurred since then.

CSW has documented a concerning uptick in attacks on religious minorities belonging to tribal and Dalit communities in Chhattisgarh in recent months. In September, several Christian families in five villages in Kondagaon District were attacked by a mob. In another incident in May, three Christian homes were broken into in Sukma District by members of Hindu nationalist groups. According to a 2020 report by Evangelical Fellowship of India (EFI), Chhattisgarh has witnessed the second highest number of religiously motivated attacks in India this year, after Uttar Pradesh.

CSW’s Founder President Mervyn Thomas said: “It is striking that on 26 November, as India celebrated the constitution that protects the right to freedom of religion or belief, these protections were being utterly disregarded by both state and non-state actors, who carried out this unprovoked attack on this Christian community. The police’s attempt to muzzle those speaking out against human rights violations is deplorable. We call on the state government of Chhattisgarh to afford individuals belonging to the Scheduled Tribe equal and necessary protection under the law, and to take measures to shield them from anti-social hostilities and violence resulting from religious fundamentalism.”

1.    A Medico-Legal Case is one where an attending medical practitioner, after conducting an examination on the patient and eliciting information, comes to the conclusion that further investigation by law enforcement agencies is necessary.