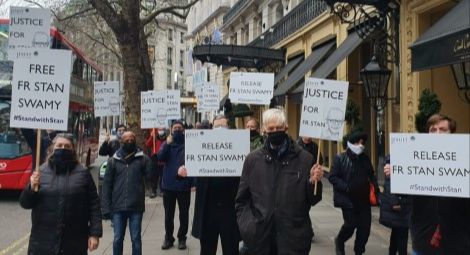 A protest has been held today, International Human Rights Day, outside the High Commission of India in London, organised by the UK-based Jesuit Missions, to mark the launch of an international campaign calling for the immediate and unconditional release from prison of Father Stan Swamy. The 83-year-old Jesuit priest has been imprisoned in India since 8 October.

This is the second silent protest organised by Jesuit Missions calling for Father Swamy’s release. It follows widespread international calls for his immediate release, including by CSW and other human rights organisations, supported by a Change.org petition which has accrued over 58,000 signatures.

Father Swamy is the oldest Indian human rights defender to be accused of terrorism in India. He has worked on issues affecting India’s Adivasis (Scheduled Tribes) for over three decades. On 8 October he was arrested by members of India’s National Investigation Agency (NIA), who subsequently took him to Taloja Jail near Mumbai.

The NIA have alleged that Father Swamy has links to far-left Maoist groups in the region, charging him under the Unlawful Activities (Prevention) Act. The priest, who suffers from ill-health including Parkisnon’s disease, was initially expected to be held until 23 October, however he was denied bail on that date and has remained imprisoned ever since.

Paul Chitnis, Director of Jesuit Missions, said: “We are at critical stage of the campaign for Fr Stan. He is in poor health, and his condition is deteriorating. The risk of contracting COVID in prison is a grave existential threat to Fr Stan.  We must keep up the pressure on the Indian government to release Fr Stan and the other human rights activists who are being held.”

CSW’s Founder President Mervyn Thomas said: “CSW joins Jesuit Missions and other organisations from around the world in calling for the immediate and unconditional release of Father Stan Swamy. This brave defender of human rights has now spent over two months in prison on completely unfounded charges, despite his age and ill-health. On Human Rights Day, we urge the international community to demonstrate a robust commitment to the defence of human rights by raising Father Swamy’s case with the Indian authorities as a matter of urgency.”