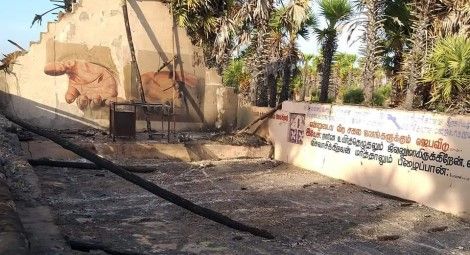 The Church of True Peace in Tamil Nadu

A church in Kaaraithittu village, Chengalpattu District, Tamil Nadu, was set on fire by unidentified persons on 13 June, resulting in the contents of the church being damaged beyond repair.

The ‘Church of True Peace’, led by Pastor Ramesh Jebraj, who is blind, took 10 years to construct the building, which was completed in 2010. The church has a membership of about 30 families, where about 70 people attended regularly before Tamil Nadu imposed a COVID-19 related lockdown. Pastor Jebraj told Persecution Relief, an Indian monitoring group that provides support to Christians, that the fence surrounding the church was burnt down by unidentified persons in 2013, but he had not made a police complaint then.

A First Information Report (FIR), required for police to begin an investigation, has been lodged with the local police station following the arson attack.

In another incident, on 19 June two Christian women from Charabari village, West Bengal, were dragged from their homes by a mob, who took them to a local club where they were verbally abused and pressured to forsake their religion.

According to a local witness, around eight men went into the house where Pastor Biswambar Munda lives with his wife Anima, their children, aged 14 and 19, and their extended relatives. Pastor Biswambar, who belongs to a tribal group, has worked for the Berachah Faith Mission for the past year. The attackers had planned to confront Pastor Biswambar, but he was not in the property when they arrived. The mob then proceeded to take Pastor Biswambar’s wife and cousin to Charabari Adibashijubo Songho club, where they were told to forsake their religion, sell their homes and leave the village. A written complaint has since been made at the local police station, however, the mob has called a village meeting at the club on 26 June to determine the fate of the Christians.

Shibu Thomas, Founder of Persecution Relief, said: “Excommunication of religious minorities has become a standard practice in the villages. The alternative is for a Christian to be forced to embrace another belief out of fear for himself. Religious intolerance and lies have been used by militant groups to instigate villagers against each other, resulting in enmity and terror.”

CSW’s Chief Executive Mervyn Thomas said: “Religious minorities in India are more vulnerable now than ever before. With persistent attacks on their properties, personhood, interests and faith, Christians and other religious minorities are a prime target of a growing culture of widespread impunity. We urge the Tamil Nadu and West Bengal state authorities, as well as the central government, to take firm measures to hold the perpetrators of these crimes accountable and commit to protecting the welfare and interests of religious minorities.”