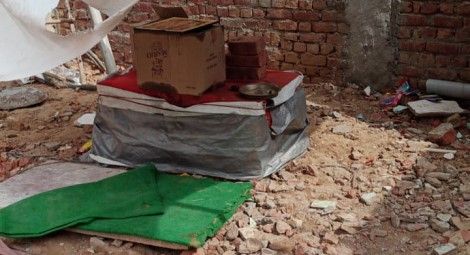 The Hindu altar inside the tuition centre, after the statue had been removed.

Hindutva nationalists broke into and occupied a tuition centre owned by a Christian organisation in the Dayal Nagar Sector, Faridabad District, Haryana State, India on 20 June. The centre, which is administered by the Karuna Welfare Society, is a social services branch of Grace Assembly of God Church in Faridabad.

The society, which has been providing tuition services in the area for over ten years, acquired the tuition centre in 2015. It currently teaches the official school syllabus to 210 students, ranging from pre-school age to 12 years old. With schools on lockdown as a result of COVID-19, the administrators of the society had decided to renovate and equip the premises with additional classrooms in order to accommodate more students when the lockdown is lifted.

On 21 June, the day after the break in, it became apparent that the gate and side walls of the property had been broken and a Hindu altar erected inside the building. Two pastors were dispatched to investigate the incident and they confirmed that there were approximately 15 people inside the building chanting prayers at the altar. According to a local source, the Bajrang Dal, the militant wing of the Hindu nationalist organisation Visha Hindu Parisad (VHP), was responsible for the incident. The two pastors filed a complaint at the police station on the same day and the police arrived at the scene and proceeded to make enquires and record the incident. Soon after they left, the group turned on the two pastors and attacked them.

On 22 June a group of leaders from the church visited the office of the Assistant Commissioner of Police’s to answer queries about the society’s activities. The police also invited representatives from the Hindu nationalist group to make further enquiries about the incident. Two men and one woman attended the meeting, dressed in saffron robes, and accused the Christians of using the premises to carry out criminal activities with young children and girls. They also accused the society of distributing leaflets supporting hate and violence, sanctioned by the Pope. The police found no grounds in the accusations, and directed the group to vacate the property, assuring the pastors that the group would vacate on the evening of the same day.

However, the police’s instructions were ignored, and the Hindu nationalists continued to meet in the premises to hold prayers. After numerous appeals from the leadership of the church, the Surajkand police intervened on 27 June to ensure that the idols were removed from the premises. Speaking to CSW on the day that the police removed the idols, a source from the church told CSW: “We are thankful to the Station House Officer of Surajkund police station for his intervention and ensuring that the appropriate measures are taken. However, we continue to be vigilant as today’s encounter attracted unidentified individuals in vehicles to the scene to see what had happened soon after the idols were removed. While we will have to wait and see how things are before engaging the building contractors to resume their work, we are concerned for the safety and security of the contractors and our students and staff once the tuition centre resumes operation.”

CSW’s Chief Executive Mervyn Thomas said: “We welcome the measures taken by the Surajkund police and urge the local authorities to offer the necessary support and protection to the students, their families and staff in the area. We are pleased that the police took the right action in this instance, but unfortunately this is not the case in far too many cases in which the police and other authorities have been known to work hand in glove with nationalist groups, with the result that they feel increasingly emboldened to ignore the law.”