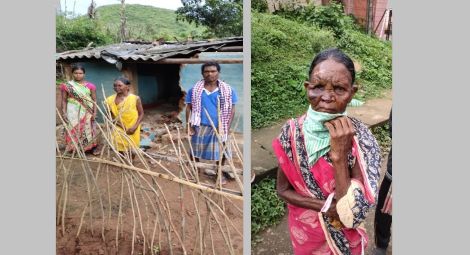 Victims of the attack in Badaguda. Credit: CSW

Christian families assaulted in their home

Eight Christian families were attacked by a mob of Hindu nationalists in the village of Badaguda, Koraput District, Odisha at around midnight on 21 July. An elderly lady, Chachiri Muduli, 75, and her two granddaughters, 22 and 25, were among the victims.

The families were staying at home of the village church elder, Deba Bhoi, which is used as a venue to host local prayer gatherings, after their own homes had been damaged earlier this year. Mr Bhoi’s home was partially destroyed by the attackers. The village consists of approximately 200 households. Local sources say that the situation in the village remains tense as the Christians continue to live in fear and anxiety, under challenging conditions.

The local itinerant preacher, Pastor Jitendra Khosla, registered a First Information Report (FIR), which is required for the police to begin an investigation, on behalf of the families on 22 July. Two unidentified persons believed to have led the attack were arrested by local police, however local sources say that the men were released on bail on 29 July.

This is not the first time the Christian community in Badaguda have been attacked; on 26 March their place of worship was set on fire. An FIR was registered at the police station in Koraput, and representations were made calling on the District Collector to intervene. The authorities followed-up by setting up a Peace Committee to mediate between members of the community, however according to local sources, who called the mediation “a whitewash,” it did not resolve the core challenges faced by the community, and that religious fundamentalist forces in the village were determined to rid the village of the Christian community.

Attacks on Christians in Odisha have increased significantly in recent months. According to the Evangelical Fellowship of India (EFI) report, Odisha is placed fourth after Uttar Pradesh, Chhattisgarh and Tamil Nadu in the number of reported targeted attacks against Christians in the last six months of 2020. On 4 June a 14-year-old Christian boy was brutally murdered in the village Kenduguda, Malkangiri District, Odisha. On 25 August, Odisha will mark 12 years since the worst outbreak of targeted Christian attacks in Kandhamal District.

CSW’s Chief Executive Mervyn Thomas said: “It is deeply worrying to hear of the continued harassment and deliberate targeting of the Christian community in Odisha. The state has witnessed perhaps the most severe assault on Christians in India’s recent history in the Kandhamal massacre of 2008. The tragedy in that district, was not an overnight occurrence. Instead, hatred and misinformation about Christians was allowed to fester for many years preceding the attacks. This must not be allowed to happen again. We urge the authorities to carry out their investigations properly and hold the perpetrators of this brutal attack to account, taking the necessary steps to assist the community feel safe to continue to live in their village without any fear.”