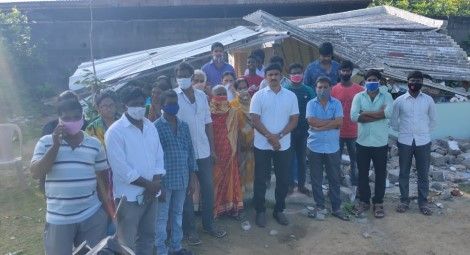 A church in Khammam District in India’s Telangana state was demolished on 31 August at around 2am. It is believed the perpetrators were Hindu nationalists.

The Grace Prayer House is attended by an estimated 180 Christians, consisting of about 30 to 40 families. It is led by Pastor Shyam Kumar, who has been serving as a church minister in the area for the past 11 years.

The church was broken into in 2019 during a Sunday worship service. Attendees were forcefully evicted from the prayer house by a mob of about 50 people belonging to the Sangh Parivar, a large Hindu nationalist movement. According to a local source, the perpetrators had claimed ownership of the land occupied by the church using fake documentation, and had lodged a police complaint against Pastor Kumar.

A First Information Report (FIR), required for the police to open an investigation, has been registered in relation to this latest incident. It is believed that the same mob belonging to the Sangh Parivar in the 2019 incident is behind the demolition of the church building. According to a local source, the damage to the property and the contents is estimated at just under 2 lakhs (approximately £2,054). Since the demolition, Christians in the area have been using a temporary makeshift tent to pray. Police investigations into the matter continue.

CSW’s Founder President Mervyn Thomas said: “It is deeply concerning to see that the Grace Prayer House has been the subject of a targeted attack by the Sangh Parivar. Families depend on their local church as a place of hope and a source of joy and peace as they gather for collective prayer. The destruction of the property is an attempt to send a message to the Christian community in the village that their religion is unwelcome, and a direct violation of the community’s right to practice their religion. We call on the police to take concrete action against those who were behind the harassment of these Christians and the destruction of their place of worship, ensuring that justice is served.”