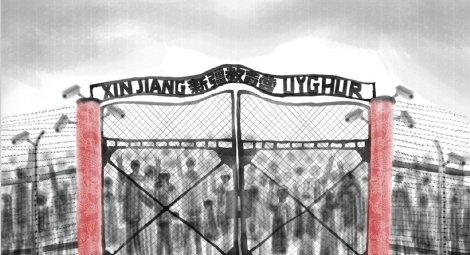 CSW calls for action on genocide on Holocaust Memorial Day

As the world marks Holocaust Memorial Day, CSW calls for swift intervention in current situations where atrocity crimes may currently be underway.

During the event Together for Uyghurs, which CSW hosted jointly with René Cassin, the Jewish voice for human rights, on 25 January to mark Holocaust Memorial Day, prominent leaders and thinkers drew on varied faith and belief traditions to inspire advocacy for the Uyghur people, over one million of whom are believed to have been detained arbitrarily in political re-education camps in the Xinjiang Uyghur Autonomous Region (XUAR), where they face grave human rights violations, including forced labour and sterilisation. Recent estimates of those detained are as high as three million.

Ziba Murat, daughter of retired Uyghur doctor Gulshan Abbas who has been sentenced to 20 years in prison because of her family members' activism in the US, told attendees: “Never again should mean something. The legacy of millions of innocent people brutally murdered demands this… This isn’t just about me, it isn’t just about the Uyghurs... but by addressing these individual cases, by demanding my mom’s freedom, we are also protecting the future of the world and the conscience of humanity.”

Signatories to the UN Convention on the Prevention and Punishment of the Crime of Genocide (Genocide Convention) are under an obligation to take measures to prevent and to punish this crime.  However, indicators of genocide and other atrocity crimes are rarely addressed in a timely manner, as attempts to do so become mired in international politics, resulting in a failure to protect vulnerable communities.

Examples include Nigeria, where an uptick in a sustained and ongoing campaign of armed violence targeting Christian farming communities in the country’s central states has claimed thousands of lives since 2015, occasioning a report the UK All-Party Parliamentary Group for International Freedom of Religion or Belief (APPG-FoRB) entitled ‘Nigeria: Unfolding Genocide?’.

Additionally, there are indications that atrocity crimes may be underway in Ethiopia’s Tigray region, where a violent conflict has been ongoing since November between the Ethiopian authorities and the Tigray Peoples’ Liberation Front (TPLF), formerly the regional authorities. The Ethiopian authorities, whose forces are fighting alongside soldiers from Eritrea and Somalia and a militia the Amhara region, claim they are only targeting the Tigrayan leadership and its forces.  However, over the course of the conflict, egregious human rights violations have been reported, including mass rape, extrajudicial killings of men and boys in particular, extensive looting and the indiscriminate bombing of homes, churches, mosques, educational establishments, and other civilian structures.

A particularly egregious example of the violations underway in Tigray is the reported massacre, allegedly by Eritrean forces, of around 750 people at the Maryam Zion Church in Axum, which is believed to house the biblical Arc of the Covenant.  While details surrounding these extrajudicial killings have been slow to emerge, it is currently alleged that the victims were attempting to protect the Arc from government-allied militia from the Amhara ethnic group, who sought to relocate it to their region. Tigray is home to several world heritage sites, and the massacre occurred against the backdrop of extensive looting of ancient religious manuscripts and objects.

The Eritrean government stands accused of committing crimes against humanity since 1991. In a joint letter issued in November 2020 to various officials of the United Nations (UN) and the African Commission on Human and Peoples' Rights, CSW and eight other organisations had raised concerns regarding the presence of thousands of Eritrean troops in Tigray, which posed a serious threat to the wellbeing of Eritrean refugees in the region. The letter also highlighted concerning reports of refugees being forcibly returned to Eritrea in an appalling violation of international law and humanitarian norms.

CSW’s Founder President Mervyn Thomas said: “On this day, we stand with the Jewish community in solemn remembrance of the many lives lost in the Holocaust, and echo their calls for an end to China’s persecution of the Uyghur people, whose identity, culture and religion is being erased. The devastating and long-term impact of these crimes cannot be overstated. We urge the international community to intervene consistently in every situation where the risk factors and early warning signs of potential genocide are visible. It is not enough to say ‘Never Again’ if we do not act immediately once it becomes clear that atrocity crimes such as genocide are underway.”

1.       Other speakers at the Together for Uyghurs event included The Rt Hon and Rt Rev Lord Rowan Williams, former Archbishop of Canterbury, Rabbi Jonathan Wittenberg, Senior Rabbi of Masorti Judaism, Andrew Copson, Chief Executive of Humanists UK and President of Humanists International, and Sonam T Frasi, FCA, RAS, Representative of His Holiness the Dalai Lama for Northern Europe, Poland and the Baltic States, London, UK. A recording of the event will be broadcast tonight on Facebook and YouTube.