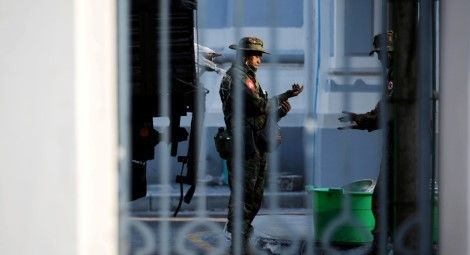 In what appears to be a military coup in Burma/Myanmar, the country’s de facto head of government Daw Aung San Suu Kyi, the country’s President Win Myint, Chief Ministers across the country, and other key pro-democracy civilian leaders have been arrested.

Burma has a history of military coups, but after almost fifty years of direct military rule, the country began a transition to civilian democratic rule in 2010. There was further progress in elections in 2015, which resulted in the first government led by Aung San Suu Kyi and her party, the National League for Democracy (NLD). In November 2020, the NLD won re-election by an overwhelming majority, despite concerns about an escalation in human rights violations and exclusion of minorities in the country’s ethnic states and conflict areas. Burma’s military is now arguing that the election was “fraudulent” and has detained key pro-democracy leaders.

The coup has drawn widespread international condemnation. US Secretary of State Anthony J. Blinken called on the Burmese military to reverse their actions “immediately” and “to release all government officials and civil society leaders and respect the will of the people of Burma as expressed in democratic elections on November 8.” The UN Secretary General Antonio Guterres issued a statement in which he described the developments as “a serious blow to democratic reforms in Myanmar.” The President of the European Council, Charles Michel, condemned the coup in a tweet, calling for the military to release all those who have been detained unlawfully and for the restoration of the democratic process.

Benedict Rogers, CSW’s Senior Analyst for East Asia and author of three books on Burma, said: “The events of the past few days and especially the past 24 hours are a desperate step backwards for Burma. We urge all sides to engage in meaningful dialogue, peaceful talks and negotiation. We urge the military to respect the democratic process, and we call for international mediation to help all sides to reach an agreed way forward. We call for the immediate and unconditional release of all those detained, the complete lifting of restrictions on telephone and internet communications and an end to the military’s presence on the streets. If these demands are not met within the coming days, we urge the international community to impose the toughest possible targeted sanctions on Burma’s military leaders and their enterprises, and all foreign investment in those enterprises. There should be a stark warning: if the military reverts to the political repression of a decade or more ago, the international community will respond accordingly, and Burma will return to the dark days of isolation from which it has only recently emerged. It is in no one’s interests, and so we must urge all parties to step back from the brink.”