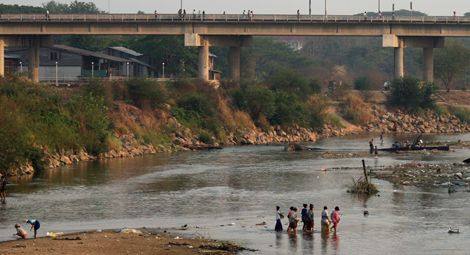 On 1 February 2021 the Burma/Myanmar army seized power in a coup, declaring a year-long state of emergency and placing the country’s leader, Aung San Suu Kyi, and other civilian leaders under house arrest. The coup brought to end a decade of civilian democratic rule which saw some limited positive political developments.

The coup has raised serious concerns for the situation of human rights and democracy in the country. Following the coup, the military declared a year-long state of emergency and put Aung San Suu Kyi and other civilian leaders under house arrest. Political power is now held by the commander-in-chief of the Burmese army, Min Aung Hlaing.

In a concerning indicator of the potential implication for the right to freedom of religion or belief (FoRB), CSW has also confirmed the arrest of at least three Buddhist monks within hours of the coup.

Ashin Ariya Vansa Bivansa, known as “Myawaddy Sayadaw,” and Ashin Sobitha were arrested in Mandalay, while Shwe Nya War was detained in Rangoon. On 3 February, it was reported that Ashin Sobitha had been sentenced to two years in prison. Myawaddy Sayadaw, a prominent Buddhist leader and vocal critic of both the military and the extremist Buddhist nationalist movement, has been disrobed as a monk and was scheduled to appear in court again on 9 February.

The United States Commission for International Religious Freedom (USCIRF) has also raised concerns in the coups’ aftermath, with the Commission’s Vice-Chair Anurima Bhargava issuing a statement which said: “Given the history of brutal atrocities by the Burmese military, our fear is that violence could quickly escalate, especially towards religious and ethnic communities, such as the Rohingya and other Muslims. We urge the Burmese military to honor the faith and will of the Burmese people and restore democratic civilian rule as soon as possible."

On 8 February the Joint Strategy Team, a group of local humanitarian non-governmental organisations (NGOs) providing assistance to people affected by armed conflict in Kachin and northern Shan States, said that “the military coup is severely affecting the IDPs communities in Kachin and Northern Shan states. The military are taking more positions with armed troops and artillery, even in towns; and it has impacted on the transportation and movement of local people including IDPs. The civilian population is very worried, fearing that armed clashes will occur.”

Meanwhile in Karen State, according to the Free Burma Rangers, over 7,000 people have been displaced in the past two months due to Myanmar Army attacks, despite a ceasefire. Over 70,000 people are displaced in Arakan State, while over 100,000 remain displaced in Kachin State and northern Shan State.

The coup sparked widespread national protests, marches and walk-outs, which have been met with a heavy-handed and violent response from the Myanmar army and police, involving water cannons, rubber bullets and live ammunition. The United Nations reports that the crackdown has resulted in at least 56 deaths, although the real death toll is believed to be much higher. Additionally, nearly 1,800 people have been detained and 1,472 remain in custody, according to a Yangon-based rights group.

On 28 February, police and military forces used lethal force against protesters in locations across the country, resulting in the deaths of at least 20 people, with hundreds more beaten, arrested and injured.

On 8 March, UCA News reported that at least four protesters had been shot and two had died after being struck in the head as security forces dispersed protesters with live ammunition, tear gas and rubber bullets in Myitkyina, the capital city of Kachin State. Sister Ann Rosa Nu Tawng, who earned international acclaim after kneeling in the road to plead with security forces not to shoot protesters on 28 February, repeated her brave act on March 8 in Myitkyina.

On the same day, security forces in Yangon cornered approximately 200 protesters in a four-street area in Sanchaung district. The BBC reports that at least 40 people were arrested and taken away, but others managed to escape as police numbers dwindled overnight.

The years leading up to the coup had already seen very grave setbacks, with the fragile democratisation process increasingly undermined. There is evidence of significant regression in some areas, particularly freedom of the press, freedom of expression and FoRB.

Meanwhile a movement of militant Buddhist nationalism has arisen which preaches hatred, principally of Muslims, but also threatens Christians and other non-Buddhists, and indeed affects Buddhists who attempt to oppose it.

In August 2017 the Myanmar army launched attacks on Rohingya villages and civilians which resulted in over 700,000 people fleeing to Bangladesh, thousands killed, and hundreds of villages burned. Reports of the atrocities of mass violence perpetrated during this period include the burning of homes, schools and mosques, the deliberate burning of people to death inside their homes, mass rape, torture, execution without trial, and the blocking of aid.

The UN Special Rapporteur for human rights in Myanmar has said that the violence against the Rohingya has the ‘hallmarks’ of genocide; the Independent International Fact-Finding Mission established by the UN Human Rights Council claims to have documented evidence of genocide; and in January 2020 the International Court of Justice (ICJ) issued a ruling ordering the government of Myanmar to take immediate “provisional measures” to prevent genocide against the Rohingya,

The crisis follows decades of severe persecution of the Rohingyas. The state has continued to deny Rohingyas their citizenship rights, rendering them stateless, as the 1982 Citizenship Law remains in force even though the Rohingyas have existed in Myanmar for several centuries, and certainly many generations. The law has a very serious impact on the country’s Rohingya population who continue to live in the country without citizenship rights such as the right to vote, to move freely, or to access basic services.

In recent years violations of FoRB and other human rights have also been observed in several states in northern Myanmar, notably in Kachin and northern Shan states, perpetrated against the majority Christian Kachin and Chin ethnic groups. Widespread conflict between the Myanmar Army and the Kachin Independence Army (KIA) has led to thousands of civilian deaths, and the displacement of over 120,000 people. In September 2018 the UN Independent International Fact-Finding Mission on Myanmar declared that the violations documented in Kachin and Shan states amounted to crimes against humanity and war crimes.

To the Myanmar army: