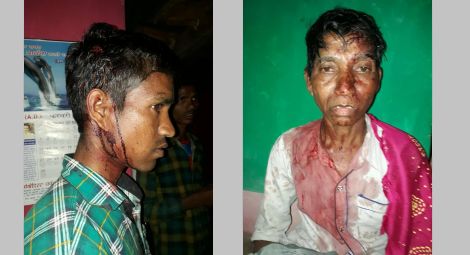 Victims of the attack in Surguda

Christians in Chhattisgarh continue to face discrimination and targeted violence

On 8 March, a Christian private prayer meeting in Surguda, Bastar District, in India’s Chhattisgarh state, was interrupted by a mob of about 70 people. The incident took place at approximately 8.30pm in a house belonging to an individual named Jaggu, where approximately 30 people had gathered to pray.

According to a local source, some members of the mob wielded weapons and surrounded the property, while others entered the house. They proceeded to verbally abuse and assault the Christians, burning Bibles, furniture, bicycles and a motorcycle. At least six people were admitted to the hospital due to serious injuries.

The police have assured the Christians that they will register a First Information Report (FIR), which is required to open up an investigation, against the perpetrators of the attack. It is believed that the mob who carried out the attack were affiliated with Hindu right-wing ideology.

According to the yearly report by the Evangelical Fellowship of India (EFI), 55 incidents of violations against Christians were recorded in the region of Chhattisgarh in 2020, the second highest after Uttar Pradesh. Between January and March 2021, the state has already witnessed at least eight incidents documented by a source known to CSW. The incidents involve Christians facing pressure to convert through ghar wapsi ceremonies, ostracisation from the village, restrictions on burial rights and denial of access to communal village resources.

Chhattisgarh is one of the nine states in India which has controversial laws regulating religious conversions. Known as Freedom of Religion Acts, these laws are often used as a basis to intimidate and initiate false charges against religious minorities from practicing and sharing their faith. The scion of Bastar’s royal family, Kamalchand Bhanjdeo who is a member of the Bharatiya Janata Party (BJP) recently said that strict laws should be used to stop conversions, as he believes it has escalated rapidly in Bastar District, Chhattisgarh, adding that those who have been converted should be removed from receiving reservation benefits.

CSW’s Chief Executive Scot Bower said: “My thoughts today are foremost with those who are recovering in hospital, their families and all those who gathered in private to pray. This brutal attack on a prayer meeting is yet another example of the rise in crimes against religious minorities in several Indian states. When private prayer gatherings are seen as soft targets for mob violence it is evident that states are failing to uphold an individual’s right to manifest their faith, which is a central aspect of freedom of religion or belief and protected by the Indian constitution. Religious minorities must feel free and safe to be able to express their faith without trepidation or fear of being attacked. There is clearly a need for the state authorities to take sustainable measures to change the perception of other faiths among the community, and encourage the need for mutual respect and peaceful coexistence.”

1.    ‘Ghar wapsi’ are known as ‘homecoming’ ceremonies, where non-Hindus are converted to the Hindu religion.

2.    ‘Reservation’ is a form of affirmative action by the Indian government to uplift underprivileged groups, such as the Dalits. It includes providing employment opportunities, ensuring participation in public service, and reserving quotas in the education sector.