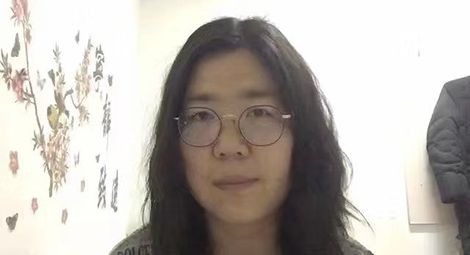 China has seen a severe clampdown on freedom of expression in recent years, with journalists, human rights defenders and activists being repeatedly targeted by the state. Since the start of the pandemic – and the increased international attention on China that’s come with it – the authorities have certainly not been any more willing for the truth to be made known.

Yet, despite the dangers, there are countless individuals in China who remain determined to take a stand for justice and share the facts. We consider the story of just one of these incredibly brave individuals: Christian human rights defender Zhang Zhan.

‘We should seek the truth and seek it at all costs. Truth has always been the most expensive thing in the world’

In early February 2020, Zhan travelled to Wuhan, the epicentre of the COVID-19 outbreak. She went there on a mission: to report on the pandemic and ask some very difficult questions. She was determined to discover whether the authorities’ response to the pandemic infringed on human rights, and whether attempts had been made to cover up the seriousness of the outbreak.

But her investigations came at a price. She always knew they would.

On 14 May Zhan was taken away from her hotel room and placed in a detention centre in Shanghai. She spent over seven months there, during which time her health deteriorated drastically.

On 28 December Zhan was eventually tried and sentenced to four years in prison, charged with ‘picking quarrels and provoking trouble’ – a charge that is regularly levelled at Chinese lawyers, activists and journalists.

‘I hope that I can make a little breakthrough. Too many people are unwilling to speak and stand up for justice because of fear’

Zhan had been determined to expose the truth, even though she was fully aware of the danger she’d be putting herself in by doing so.

In a conversation with one of her lawyers in December, she shared her motivations. Zhan explained that she felt compelled to speak out against the injustice she could see happening around her; that she couldn’t bear to see people suffering; and that she felt convicted by her Christian faith to do what she thought was right.

It was this same motivation that led Zhan to go on hunger strike in protest at her unjust detention. In January of this year one of her lawyers reported that she had partially ended her hunger strike, but that she ‘appears to have aged several decades’ and ‘feels psychologically exhausted’ by the ordeal.

‘If I were to face God, I would pray sincerely for the perpetrators and ask Him to forgive their sins’

Her lawyer also explained that, since her arrest, Zhan has prayed regularly for God to forgive the sins of others; for those who’ve wronged her and those who’ve been trying to conceal the truth.

Since her trial in December, Zhan is no longer allowed to see her lawyers or members of her family – though the authorities have claimed this is due to the pandemic. Her parents have been under surveillance, and the lawyer who defended Zhan has been disbarred. It’s possible that we won’t hear anything about Zhan’s wellbeing for some time.