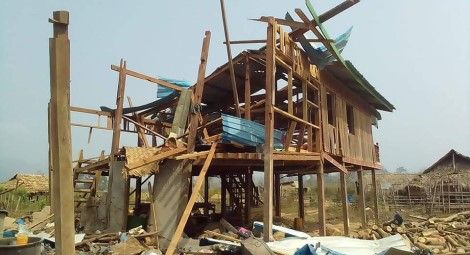 The Free Burma Rangers have reported that over 20,000 people have been displaced as of 1 April following airstrikes by the Myanmar/Burma army in northern Karen state. The airstrikes have targeted civilians, school and medical clinics, and began on 27 March.

On 1 April, at least 14 people were killed and 40 more were injured, including women and children, in airstrikes in Dwe Lo Township, Papun District. Many others have been killed and wounded during the campaign, although the exact number is unknown, and the Free Burma Rangers (FBR) have also reported the destruction of homes and village food stores.

While the military has reportedly now declared a ceasefire, the FBR reports that many displaced civilians believe this is only a delaying tactic, and therefore are remaining in hiding.

The airstrikes are the latest development after years of conflict between the Myanmar military and the ethnic Karen people, and appear to realise concerns raised that the military would increase their campaigns of violence against Myanmar’s ethnic nationalities following their return to power in the coup of 1 February.

In September 2018 an UN Independent International Fact-Finding Mission declared that the military was responsible for crimes against humanity and war crimes against the country’s ethnic nationalities in Kachin and Shan states, as well as for the crime of genocide against the Rohingya people.

Benedict Rogers, CSW’s Senior Analyst for East Asia and author of two books on Myanmar/Burma said: “This intensified offensive against the Karen people by the military in Myanmar/Burma is deeply concerning. The army has not only totally broken a ceasefire agreed almost a decade ago, but it is using such force that it is creating a humanitarian crisis on its borders at the same time as using lethal force to crackdown on protests in the cities and towns. It is perpetrating grave human rights violations that may amount to war crimes and crimes against humanity, and the international community must act urgently to prevent this escalating further. We need more robust, co-ordinated, targeted sanctions against the military and its enterprises, and a global arms embargo. Failure to act urgently and with every tool available will result in a humanitarian disaster in the country.”