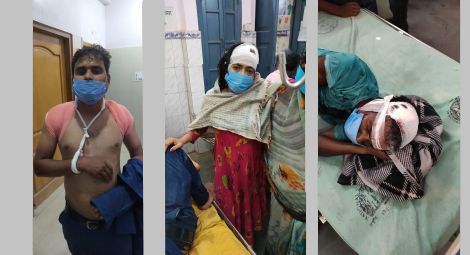 A pastor and his wife were severely injured after they were attacked whilst praying in their home on 22 April in Sitamarhi in India’s Bihar state.

According to Pastor Ram Niwas, his four brothers and another villager, who are supporters of the Bajrang Dal (the militant wing of the Hindu nationalist organization Vishwa Hindu Parishad), broke into their property with a hammer while they were praying and started beating them with sticks. A church member called Narender, who had gone to the couple’s home for prayer, came to the couple’s aid, while the remaining mob from the Bajrang Dal stood outside the house.

Pastor Niwas’s shoulder was fractured in the attack, while his wife Pinky sustained severe head injuries which required medical attention. Narender was also severely injured and was taken to the Muzaffarpur hospital for treatment. The attack was recorded on CCTV installed at the pastor’s house, but the recording and video camera was confiscated and handed to a local Bharatiya Janata Party leader Arun Singh.

According to a local source, Pastor Niwas had been a target of the militant group for some time and has been accused of carrying out conversions and forcing people to consume beef (cows are sacred to Hindus).

The pastor, who is disabled because of a childhood accident, has been working among the Scheduled Caste in Sitamahri as part of his Christian ministry for the past six years. As a result of his work, he has received threats to his life from the Hindu nationalist groups under the Rashtriya Swayamesevak Sangh (RSS) since 2018, including one incident in which he was warned that “if you wish to stay here you and all those whom you converted to Christianity must reconvert and go through the rituals of ghar wapsi ceremony.”

In 2020, a mob of 20 people belonging to the Bajrang Dal attempted to attack Pastor Niwas. The pastor reportedly filed a complaint, but the police had failed to take any action and a further complaint was filed under Section 156(3) of the Code of Criminal Procedure (CPC), requiring an investigation into the case. Despite this, the local source informed CSW that the matter remained unresolved.

CSW’s Founder President Mervyn Thomas said: “Our deepest sympathies are with this couple, who were attacked simply for practicing their faith. The Indian state must ensure that all citizens are afforded the adequate protection under the law, and it is deeply concerning that the authorities did not act on previous threats to Pastor Niwas, allowing the campaign of fear and intimidation against him to continue. We urge the local authorities to take this matter seriously and investigate as a matter of urgency, ensuring that the perpetrators of this attack answer for their crimes.”