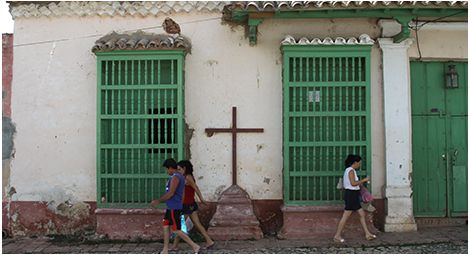 A Havana based nun has published an open letter protesting the Cuban government’s “disproportionate” targeting of a nursing home for elderly women run by the Servants of Saint Joseph in Miramar, Havana.

Ana Elena Fundora Lima published the letter on Facebook specifically denouncing the visit on 12 April of a government inspector who failed to follow COVID-19 protocols, despite the fact that the home is on lockdown because the residents are high risk.

According to Ms Fundora Lima, the inspector, who identified herself as Raida, issued a fine of 2000 pesos (approximately USD 85) for a series of minor infractions including the lack of a manufacture date on bottles of chlorinated water and a failure to display posters with a written plan on how the nursing home planned to combat COVID-19.

A source told CSW that the nursing home for elderly women is located in a mansion built before the 1959 Revolution which was left to the Servants of Saint Joseph Catholic Order by the family who originally owned it. The same source said that the building has long been targeted by the government because of its size and appearance and its prime location in an upscale area of Havana in the midst of numerous foreign embassies. They noted that the nuns who run the home live in the old servant quarters to ensure that the elderly women are able to live in the rest of the house.

In her open letter, Ms Fundora Lima wrote: “What deeply outrages me about this unjust and cynical act is that until today, no one from the Ministry of Health has been concerned with knowing how we are providing careful care for the elderly women and those who work here on a daily basis, not even to verify the quality of life of the elderly women. So what is it that matters? How do they expect us to use the very few human resources that we have to carry out these tasks? The only answer is "that's the protocol." … It is evident that the "protocols" (and those who adhere to them) do not know at all what it means to have to constantly discern and prioritize between the “guidance" and what is essential. It is a shame that they look at insignificant details that change no one’s life and do not refer to impeccable hygiene, the general condition of elderly women, their quality of life.”

Ms Fundora Lima went on to state that the nursing home has put in place strict rules to prevent the spread of COVID-19, including mandating that all those who work there do so on 14 day shifts without leaving the building. She pointed out that since the COVID-19 situation worsened in March, the nursing home has ensured that all staff are tested before they begin their shifts, but the government has delayed the return of the test results in all but one out of five occasions that testing has been carried out.

CSW has expressed concern that over the past year the Cuban government has in some cases used the COVID-19 pandemic as an excuse to target religious groups unfairly. Violations of freedom of religion or belief (FoRB) remain consistently high, despite the fact that many religious communities have been less active because of the COVID-19 restrictions.

CSW’s Head of Advocacy Anna-Lee Stangl said: “CSW is highly concerned by the targeting of this nursing home by the Cuban government. Cubans across the island are struggling to cope with both the current economic difficulties as well as the COVID-19 pandemic. Efforts working to support and protect some of the most vulnerable like those carried out by the Servants of Saint Joseph should be welcomed. An inspection of the nursing home by a government official who notably did not follow COVID-19 protocols herself is not only unjust but also puts the lives of both the residents of the nursing home and those who work there at risk. We call on the Cuban government to refund the fine imposed on the home, and to cease all harassment of the Servants of Saint Joseph and all religious groups across the island that are carrying out work to support their communities in the midst of crisis.”