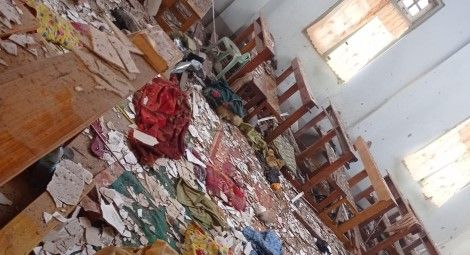 Four civilians were killed and eight more were injured in an attack by the Myanmar/Burma army on a Catholic church in Kayan Thar Yar village in Kayah (Karenni) State on 24 May.

The incident marked the latest in a series of attacks on Christians and churches which have taken place amid a wider crackdown on civilians in the aftermath of the 1 February military coup.

According to a statement by the Ministry of International Cooperation of the National Unity Government of Myanmar, at approximately 1am on 24 May, military forces fired a heavy artillery shell at the Catholic church in Kayan Thar Yar, where elderly people and children were reportedly hiding after fleeing their homes following earlier attacks on their village.

The shelling took place just two days after military forces raided a Karen Baptist Church in Insein, Yangon, on 22 May. The church pastor and two other young men were violently beaten and detained, the church was ransacked and its property destroyed.

On 1 February, the Myanmar army, known as the Tatmadaw, seized power in a coup. This sparked widespread national protests, marches and walk-outs which have been met with a heavy-handed and violent response from the army and police, involving water cannons, rubber bullets and live ammunition.

Church leaders have also been particularly targeted. On 13 May, Father Columban Labang Lar Di of the Banmaw Diocese in Kachin State was arrested by military forces as he was travelling from Banmaw to Myitkyina. He was released on 17 May after repeated appeals from church leaders and members of the international community.

Benedict Rogers, CSW’s Senior Analyst for East Asia and author of three books on Myanmar/Burma, said: “Civilians in Myanmar have now been subjected to horrific violations at the hands of the Tatmadaw for well over 100 days. We extend our deepest condolences to all those who have lost loved ones in the recent attack on the Catholic church in Kayan Thar Yar and continue to call on the Tatmadaw to cease all targeting of innocent and unarmed civilians. The international sanctions introduced so far have been welcome, but states can and must do more to cut off funding to the Tatmadaw and increase pressure on it to halt its assault on the people of Myanmar. We urge the UK government and like-minded allies to take the lead in implementing further sanctions against the military and their enterprises, and to coordinate the imposition of a global arms embargo.”

Violence has been particularly severe in the town of Mindat in the western state of Chin. Ongoing clashes between the Tatmadaw and Myanmar’s ethnic armies have resulted in the displacement of tens of thousands of civilians who are reported to be living in dire conditions.

1.       Click here to read the full statement of the Ministry of Intentional Cooperation of the National Unity Government of Myanmar.

2.       The National Unity Government of Myanmar was formed on 16 April 2021 in response to the 1 February military coup, and claims to be the legitimate government of Myanmar/Burma. The body includes lawmakers elected in the 2020 election, members of the ethnic groups and key figures in the anti-coup protest, almost all of whom are in hiding or in exile.

3.       Join CSW’s campaign for a global arms embargo against the Myanmar/Burma military by writing to the UK Foreign Secretary or your US Senators.