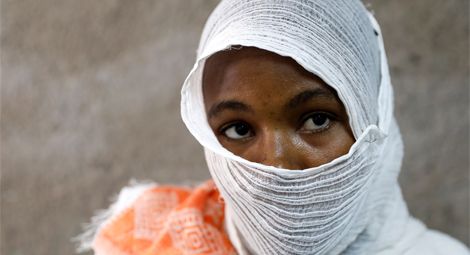 An Ethiopian woman who says she was gang-raped by armed men. REUTERS/Baz Ratner

Massacres, starvation and wanton destruction: The truth about Tigray

A brutal battle for control of Ethiopia's Tigray region has claimed over 52,000 lives and forced an estimated two million people to flee since hostilities began last November.

Despite a communications blackout imposed by the Ethiopian government at the beginning of the conflict, and ongoing restrictions, reports continue to emerge of horrific crimes perpetrated largely by Eritrean soldiers. These crimes include brutal acts of sexual and gender-based violence, indiscriminate bombing, extra judicial killings, and looting of homes, businesses and historical and religious sites. The fundamentally sadistic nature of the secretive Eritrean regime is on open display in Tigray.

A renowned monastery established in the 6th century, as well as one of the oldest mosques in Africa, have been damaged by shelling and looted. Another church’s compound has been used as a military command centre despite the presence of clergy and nuns.

The December killing of around 700 people at the Maryam Zion Church in Axum, which is believed to house the biblical Ark of the Covenant, brought the crisis into sharp focus. Many were dragged from the church and murdered in the streets. Survivors were not allowed to bury the corpses until  hyenas had descended on the town to consume them.

Clergy and worshippers have died in their hundreds during attacks on churches and monasteries. These attacks appear to be timed to coincide with religious festivals, possibly to inflict maximum casualties.  According to a Tigrayan official: ‘They kill whomever they find in whichever village they get in. In the village I was in yesterday – it’s a small village – they killed 21 people, out of which seven of them were priests.’

‘Waiting to starve to death’

Assefa is a resident of the northern town of Hawzen, but fled in fear of the killings. He said, ‘They are raping our women – including nuns in convents - they have pillaged our towns, they have ransacked and shelled our churches and mosques, and whoever is left, is just waiting to starve to death.’ So far an estimated 10,000 women and girls, ranging from an eight-year-old to grandmothers aged 72, have been raped.

The war on Tigray has heightened the vulnerability of the estimated 100,000 Eritreans who had sought refuge in Ethiopia from their repressive government. In what would amount to a gross violation of the United Nations and African refugee conventions, at least 6,000 refugees are alleged to have been forcibly returned to Eritrea.

Eritrean soldiers are embarking on extensive looting. Civilians are forcibly deprived of money and jewellery, while homes are comprehensively cleared, including of blankets, cutlery, shoes and clothing. Hospitals have been emptied of medication, factories of equipment, and stores of goods. Anything not transported to Eritrea is destroyed. Livestock are seized and eaten, while crops are burnt in fields.

Starvation is rife; the UN estimates some 2.3 million people – around half the Tigrayan population – are in need of assistance. People are beginning to die of hunger, while Eritrean troops deliberately obstruct aid distribution. In February, around eight people were reported to be dying daily due to illnesses exacerbated by the lack of medication.

The ramifications of the war in Tigray increasingly threaten the stability of East Africa. Ethiopia withdrew troops from Somalia to fight in Tigray, undermining anti-terrorism efforts. There has been fighting along the border between Ethiopia and Sudan, and Sudan and Egypt have expressed dissatisfaction about Ethiopia’s desire to fill its Great Renaissance dam. Ethiopia itself has become more unstable, with violence erupting  in the Benishangul-Gumuz region, an ongoing insurrection in Oromia, and tensions in the Afar region.

Sadly, international calls for a ceasefire, the withdrawal of Eritrean troops and unhindered humanitarian access have so far gone unheeded, including a call from the Hiob Ludolf Centre for Ethiopian and Eritrean Studies at the University of Hamburg, for cultural heritage sites to be respected and preserved.

There are worrying indications that atrocity crimes - war crimes, crimes against humanity and genocide  - may be underway. In the words of a priest from the Catholic Eparchy of Adigrat: ‘They want to annihilate Tigray. By killing the men and boys, they are trying to destroy any future resistance...They are raping and destroying women to ensure that they cannot raise a community in the future. They are using rape and food as weapons of war.’

The current situation constitutes a threat to both regional and international peace and security, and must be addressed decisively while it can still be contained.