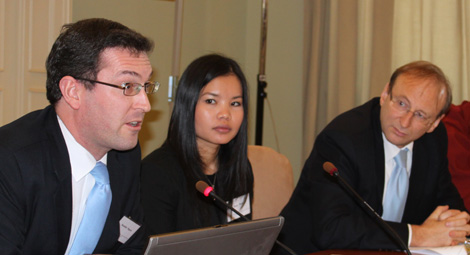 Mr Rogers will receive his award on 15 July at the inaugural International Religious Freedom (IRF) Summit, which is taking place in Washington, DC between 13-15 July. The IRF Summit is an annual gathering of defenders of international religious freedom from around the world. The IRF Champion Awards are given to dedicated individuals in civil society, business, and government who have gone above and beyond the call of duty in advancing religious freedom for everyone, everywhere, all the time.

Benedict Rogers has worked with CSW for over two decades, specialising in advocacy on freedom of religion or belief in Burma/Myanmar, Indonesia, North Korea and China. In 2020, he was named CSW Senior East Asia Analyst when he took up the role of CEO at Hong Kong Watch. Mr. Rogers is also co-founder and Deputy Chair of the Conservative Party Human Rights Commission, a member of the advisory group of the Inter-Parliamentary Alliance on China (IPAC), an advisor to the World Uyghur Congress, author of six books on Myanmar and a regular contributor to international media.

Benedict Rogers said: “I am deeply humbled and very honoured to receive this award, alongside other religious freedom champions. I receive it with immense gratitude, but I receive it not for myself but for all my colleagues, both in CSW and on the ground, on the frontlines, in the countries where I have been privileged to work, particularly Burma/Myanmar, Indonesia, North Korea and China and, in the past, Pakistan, Bangladesh and Sri Lanka. I could not do this work without all my colleagues in CSW – it is teamwork. And it is the religious leaders, human rights defenders, lawyers, civil society activists, journalists and others working to document and report violations of freedom of religion or belief, to advocate for victims of such violations, build inter-faith networks to promote and defend freedom of religion or belief or strengthen the capacity of others to engage in this work, in dangerous and difficult circumstances, who are the real champions. It has been my privilege to work with such people for more than 25 years, and this award encourages and inspires me, and all of us in CSW, to continue the fight for freedom of religion or belief, for everyone, everywhere.”

CSW’s Founder President Mervyn Thomas said: “The whole team at CSW congratulates Benedict on this award, which is so richly deserved. I have been privileged to have known Ben since he was a young university student and I have watched him grow into a passionate and tireless champion of freedom of religion or belief over these past 25 years. He has always been willing to stand up for justice and the rights of others, and has certainly regularly gone above and beyond the call of duty in pursuing this cause. Ben has a rare talent for building coalitions and encouraging others to take up the cause of those whose religion or beliefs may be very different to their own. His courage and faith are an inspiration, and it’s an honour and pleasure to continue to work alongside him.”