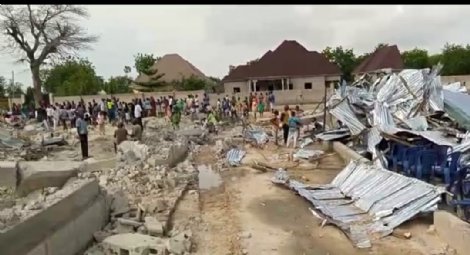 The president of the Evangelical Church Winning (ECWA)has called for urgent action to stem killings in Irigwe land in Plateau state, central Nigeria.

At least 70 people were killed in the last fortnight, and an unknown number injured, in a series of armed onslaughts by assailants of Fulani origin on farming communities in Plateau state and southern Kaduna.

In his statement, Rev (Dr) Baba Panya lamented that “the last two weeks, especially from Sunday, July 23rd to Monday, August 2, 2021 have been the worst nightmare” for the predominantly Christian Irigwe ethnic group, who are indigenous to  Bassa Local Government Area (LGA) in Plateau state, and to Kaura LGA in neighbouring southern Kaduna.

At least 15 villages were destroyed, over 400 houses burnt down, including churches and an orphanage, around 20,000 people were displaced, and thousands of hectares of farm crops deliberately destroyed, in the spate of attacks on Bassa LGA: “The main town of Jebbu Miango and its surrounding villages such as Kpachudu, Kpetenvie, Nche-Tahu, Tafigana, DTV and Zahwra are completely burnt down and displaced.”

The assailants also attacked Ungwan Magaji, Kishicho, Kigam and Kikoba Irigwe villages  in Kaura LGA, southern Kaduna, where at least 48 people were killed, over 100 homes were razed to the ground and at least 68  farmlands were destroyed, according to the president of the Southern Kaduna Peoples Union (SOKAPU),  Hon. Jonathan Asake.

Attacks by well-armed assailants of Fulani origin on farming communities in central Nigeria, which have been ongoing since 2010, increased in both geographical scope and ferocity in 2015, with perpetrators enjoying apparent impunity due to inadequate official intervention.

The ECWA president also noted that “Many of the villages, where these killings and burnings are taking place, are basically located behind the 3rd Armoured Division Barrack of the Nigerian Army, yet, these militias are allowed to continue their heinous murders and carnage without any intervention by the Nigerian Army and other security agencies[…],  eroding the confidence of the populace in the military and security agencies, as unbiased protectors of all, devoid of tribe, ethnicity or religion.”

Moreover, “No single AK-47 wielding militia” has been arrested prosecuted or brought to justice; instead “the indigenous youth who tried to defend themselves with crude instruments are paraded as aggressors.”

Deadly attacks by Fulani assailants are now occurring increasingly in the south of the country, amidst consistent reports of abductions for ransom, murders, displacements and destruction and occupation of farmlands.  On 1 August at least nine people were killed in the Isi-Uzo LGA of Enugu State, including a pregnant woman whose foetus was removed and left on top of her corpse.  In another indication of questionable behaviour on the part of the security services, local people claim that the police, who arrived 24 hours after the latest attack had ended, were refusing to release the bodies of victims of an earlier attack for burial until the local community signs an undertaking to allocate land to Fulani herders.

CSW’s Press and Public Affairs Team Leader Kiri Kankhwende said: “We extend our deepest condolences to communities in Plateau, southern Kaduna, Enugu and other states where these attacks continue to occur with apparent impunity.  Indigenous ethno-religious minorities are being targeted in a relentless campaign of violence which involves decimation, displacement, and demographic alteration, and which accelerates during farming or harvesting seasons, indicating a deliberate effort to engineer starvation and complete economic disempowerment. It is time for the international community to put aside debates about the origins and nature of this violence and to focus instead on pressing and assisting Nigeria to address this network of organised armed non-state actors. It is a tragic indication of failing or failed governance that groups with ready access to small arms, which reportedly include foreign elements, can continue to unleash the most appalling violence across the country, with minority ethnic and religious groups bearing an alarming burden of death and loss.”

In other news, a 27 year-old man named Ezekiel was killed and six people were injured when members of the Civilian Joint Task Force (CJTF) opened fire on locals as the Borno State Geographical Information System (BOGIS) demolished  an Ekklesiyar Yan'uwa a Nigeria (EYN, Church of the Brethren in Nigeria) building in the  Maduganari suburb of the Borno state capital, Maiduguri, without prior notification.  According to local reports, the EYN building is the third church to be demolished in Maiduguri by BOGIS, a body which reportedly operates under the direct supervision of the Borno state governor, Babagana Zulum.

Kiri Kankhwende added: “Our prayers are with the victim’s family, and with the injured.  Indications that a spate of church demolitions may be underway in the Borno state capital are particularly disheartening, as they come at a time when all people of goodwill, regardless of creed or ethnicity, should be uniting against the terrorist threat.  We urge the governor to be at the forefront of challenging the divisive ideologies of terrorist factions by upholding the right to freedom of religion or belief for minority faith communities within Borno, in line with the federal constitution and Nigeria’s international and regional obligations.  We also urge him to review the circumstances surrounding the demolition of the EYN Church in the Maduganari suburb, which appears to have occurred without due process, and to ensure justice for the victims of this unfortunate event.”