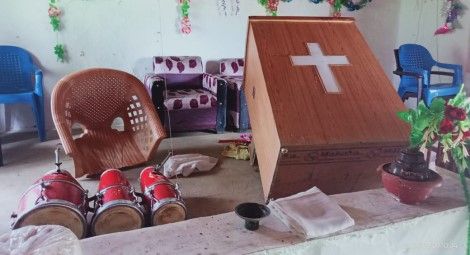 Approximately 60 Christians were gathered in the church when a mob of between 150 and 200 armed religious fundamentalists from the nearby village of Bhejgar barged in at around 10am shouting Hindu chants of 'Jai Shri Ram' (Translation: “Long Live Shri Ram”).

The mob then proceeded to beat all those gathered in the church, including women and children. CSW sources report that some of the women had their saris ripped off and their hair pulled, while the men were beaten with sticks and the altar and musical instruments were broken. The mob also tore a Bible from the pulpit and trampled it under their feet, and they placed Hindu idols inside the church and worshipped them.

When some of the women stood up to the attackers and questioned the reason for the vandalism, they were told that 'since they were born in India, they had to remain Hindus and worship Hindu deities.’

CSW sources report that while the pastor of the church submitted a written complaint which named the perpetrators of the attack, the police initially neglected to register an FIR. An FIR was finally filed at around 11pm on 29 August, but the police removed the names of the individuals mentioned in the pastor’s complaint.

The church in Polmi has been used as a place of worship for almost 20 years. It was planted by Sonsingh Paraste, and is currently led by Mr Paraste’s son, Kamal Singh Paraste, 25, after his father passed away due to COVID-19. CSW sources report that the Christians had lived in peace with the other villagers for years prior to the attack.

Arun Pannalal, President of Chhattisgarh Christian Forum, a body which has been fighting persecution and protecting churches for the past 25 years, said: "Attacks on churches and Christian houses is now a routine occurrence. Generating hatred against a community yields rich political dividends. It precipitates Hindu votes thus creating a Hindu vote bank. In other states and at the national level too, this experiment has been successful. Whichever government is in power, hatred and attacks against Christians will continue. Legal and administrative apathy will be there. After all, nearly all officers in power come from a Hindu background. The police won't register First Information Reports, the courts will keep delaying, the perpetrators will keep roaming free, waiting for another day to culminate another attack. It's a well-oiled machine, first the propaganda is introduced that Christians are ruining their culture, then defiling their religion. Next, Hindus are touted as patriots, while Christians are traitors belonging to the British/European lineage of faith."

CSW's Founder President Mervyn Thomas said: "Too often Christians in India are attacked by Hindu nationalists who are emboldened by a culture of impunity and the government’s own rhetoric of Hindutva. We call on the Indian government and the government of Chhattisgarh to ensure that the perpetrators of this crime are taken to task and the victims of the attack are compensated. Freedom of religion or belief is a fundamental right upheld in the Indian constitution, and no one should be forced to practice a faith that they don't believe in."