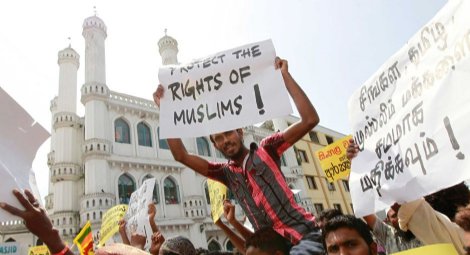 A Nation Divided: The state of freedom of religion or belief in Sri Lanka

This report provides an overview of the situation of freedom of religion or belief (FoRB) in Sri Lanka and examines surrounding legal issues, the increased role social media has played in communal violence, the effects of the 2019 Easter Sunday bombings, and the immediate effects of the Rajapaksas’ return to power. It analyses how past events will impact the future of FoRB in Sri Lanka, with the aim of supporting further advocacy and awareness-raising on the issue.

Religious intolerance in Sri Lanka has been on the rise since 2000, and particularly since the end of the 30-year civil war in 2009. The ending of the civil war set the country on a trajectory of transitional justice, but ethno-religious tensions have persisted where Sinhalese-Buddhist fundamentalism has surged; and discrimination, intolerance and violence continue to be directed at religious minorities, with Christians and Muslims being the primary targets.

One of the main drivers of religious intolerance is the perception among some in the Sinhalese Buddhist community that they are the protectors of the land, deeming Muslim and Christian minorities a threat. An ensuing deterioration in interfaith relations is exacerbated by the primacy given to Buddhism in the Sri Lankan constitution; the 2008 Circular on the construction of places of worship; a reliance by many on social media as a credible news source; hate speech; and a growing culture of impunity.

The use of social media as a credible news source contributes to the spread of false rumours, which has at times culminated in violence against religious minorities, as occurred, for example, in Ampara and Kandy during 2018.

Religious tensions were exacerbated further by the Easter Sunday bombings in April 2019, when churches were attacked in Negombo, Batticaloa and Colombo, along with hotels in Colombo. The Islamic State (IS) claimed responsibility for the attacks, but reports indicate they were perpetrated by a little-known local Islamist group, National Towheed Jamath (NTJ). The bombings were followed by a series of reprisals conducted by Christians and Buddhists against the Muslim population. A state of emergency was declared after the attacks; it can only last for a month at a time and was extended thrice, until 23 August 2019.

Running on a strong law and order ticket, the Rajapaksas and the SLPP appealed to a Sinhalese-Buddhist fundamentalist base and played on the ethno-religious tensions and divisions present within the country. Now confirmed in power, there are serious concerns the pair will pander to their supporter base and steer Sri Lanka’s trajectory away from reconciliation and towards a majoritarian state.