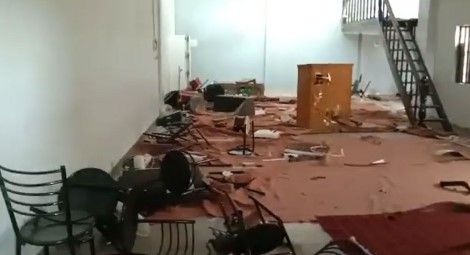 Damage at the House of Prayer church in Roorkee

Christians attacked at start of church service in Roorkee, Uttarakhand

A group of around 12 Christians gathered at the House of Prayer church in Roorkee, Uttarakhand state, were attacked by a mob of almost 300 people just before their Sunday service began on 3 October. The mob destroyed CCTV cameras, lights, fans, musical instruments and furniture.

Eva Lance, who has been leading the church alongside her mother ever since her father passed away due to COVID-19, told CSW "They didn't look like goons, they were well-off, they came in cars. I called the police station, but I wasn't able to connect. The mob entered the premises and started chanting Vande Mataram, Jai Shri Ram and Bharat Mata Ki Jai." (Chants meaning “Praise to the motherland”, “Hail Lord Ram/Victory to Lord Ram” and “Hail India”).

While Ms Lance asked the mob to sit down, the group instead proceeding to destroy the church’s property, including one man who attempted to set the vehicles parked outside on fire. Several church members were attacked, including a man who was beaten semi-unconscious, and a woman whose hair was pulled out. One member of the church, a young boy named Rajat, had his ears cut off and was beaten so badly that he was found lying in a pool of blood and his own vomit and had to be taken to hospital.

The police were called to the incident and proceeded to take Ms Lance and another church member to the station where a First Information Report (FIR), which is required to open up an investigation, was filed. The FIR named Seema Goel, Ms Lance’s former school principal, and Shiv Prasad Tyagi, a member of the right-wing Hindu group Vishwa Hindu Parishad, as being among those responsible. Despite this, the mob filed a counter case against the victims, accusing them of non-bailable offences like molestation, robbery and organised crime. So far, no arrests have been made on either side.

Ms Lance told CSW that she had contacted the police two days prior to the attack after she and her mother realised they were being followed by a car of people. She said: "The police walked in so passively, despite the fact that I had been asking for security for two days. It was so obvious that the whole rampage was pre-planned and the police were involved. The mob knew exactly where the cameras were, they were able to gather so many people together. It was so well thought out. Our church is located near the prestigious Indian Institute of Technology, Roorkee, so it's a colony of professors and highly educated people. It has been so peaceful all these years. So, it was definitely pre-planned."

Courts in India are currently closed for the festival of Dusherra, so the victims will have to wait until next week for the hearing.

CSW'S Founder President Mervyn Thomas said: "Our hearts go out to those who have been injured in this brutal assault on a group of Christians peacefully gathering to worship. This brazen attack, and the apparent involvement of the police must serve as a wake-up call for India's lawmakers. India's minorities deserve to be protected by its judicial system, and the government must do far more to combat the culture of impunity that surrounds incidents of mob violence, including by cracking down on Hindu nationalist rhetoric and hate speech espoused by government ministers."