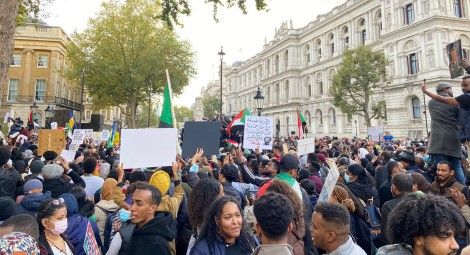 CSW is deeply alarmed by the actions of the military in Sudan, which has suspended key aspects of the power-sharing agreement with civilians in an apparent coup.

In a televised statement on 25 October, military leader Abdel Fattah al Burhan declared a state of emergency and dissolved the Sovereign Council and the Cabinet. Al Burhan added that the military intends to hold power until elections are held in July 2023. National radio and television stations were brought under military control and access to the internet is being restricted. The country’s international airport in Khartoum was also closed in the early hours of 25 October.

Ahead of the statement, there was a significant military presence in the capital Khartoum and reports emerged that members of the civilian government, including Prime Minister Abdalla Hamdok, were under house arrest.  After refusing to issue a statement in support of the military, Prime Minister Hamdok was reportedly moved to an unknown location.

As news of the coup broke, protestors took to the streets of Khartoum amidst reports of gunfire.  According to CSW’s sources at least two protesters have been killed and around six are seriously wounded.

Sudan’s civilian-led transitional government has been in a power-sharing agreement with the military, signed by civilians who led protests that resulted in the removal of Omar al Bashir in April 2019.

Tensions between the civilian elements of the government and the military component had intensified since a reported attempted coup in September 2021. The civilian government had split into two factions; one that supported the military and largely aligned with the former Bashir regime, and another representing the voices of civilians who led the December 2018 protests.

On 21 October, nationwide mass demonstrations supporting the civilian-led government took place in response to other protests that had been organised by groups calling for a military takeover. It was revealed that numerous demonstrators had been paid to take to the streets in support of the military.

The events in Sudan have been met with international condemnation.  In a statement issued today, the Chairperson of the African Union Commission, Moussa Faki Mahamat called for “the immediate resumption of consultations between civilians and military within the framework of the Political Declaration and the Constitutional Decree” and “the release of all arrested political leaders and the necessary strict respect of human rights.”

The UN Secretary General, António Guterres, tweeted: “I condemn the ongoing military coup in Sudan. Prime Minister Hamdok & all other officials must be released immediately. There must be full respect for the constitutional charter to protect the hard-won political transition. The UN will continue to stand with the people of Sudan.”

US Special Envoy for Sudan Jeffrey Feltman, who was in Sudan on 23 October, expressed deep alarm at these developments, reiterating that “any changes to the transitional government by force puts at risk U.S. assistance.”

CSWs Founder President Mervyn Thomas said: “CSW is deeply concerned by the suspension of key aspects of the power sharing agreement and the military’s unilateral dissolution of the government, which clearly undermines the will of the people, who do not want to be ruled by the military. The news of the deaths and injuries of protestors is particularly alarming, raising the spectre of the state violence witnessed under the previous regime.  We call on the military to release all civilian leaders, including Prime Minister Hamdok, and to ensure the safety of all who have taken to the streets to protest against the coup. We urge the international community to take urgent steps to support the transitional government and to unequivocally condemn the actions of the military. Steps should be taken to ensure that protestors are able to exercise their rights peacefully and that financial and other punitive measures are imposed on the military until a civilian administration is restored.”