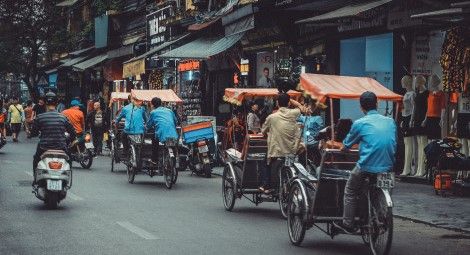 Vietnamese activist and journalist Pham Doan Trang has been sentenced to nine years in prison.

She was convicted of anti-State propaganda under Article 88 of the Criminal Code at a one-day trial on 14 December.

Trang’s mother and brother were allowed to enter the courthouse, but police stopped activists attending the trial, confining some to their homes. The harsh sentence of nine years is even longer than the prosecutors’ recommendation of seven to eight years.

Pham Doan Trang was arrested on 7 October 2020 and was not permitted to meet with her lawyer until 19 October 2021. After a second visit, lawyer Mr Le Van Luan posted on his Facebook page that Trang had been examined for health problems following appeals made to authorities by her defence team, and that an ultrasound had revealed she had a small tumour. Her trial was initially scheduled to take place on 4 November 2021 but was postponed when the prosecutors in her case contracted COVID-19.

In a letter published by online magazine The Vietnamese  on the day of the trial, Trang wrote: “only extremely foolish and heinous governments would try to extinguish it [pluralism] through repression and the imprisonment of dissidents, writers, journalists, social critics, and democracy and human rights activists”.

Pham Doan Trang has a long history of peacefully advocating for freedom and human rights in Vietnam as an independent journalist, and the founder of an environmental rights group and several independent media outlets. In 2017, Trang and other writers produced a report on the right to freedom of religion or belief (FoRB) in Vietnam. The report concludes that “no religions (Buddhism, Catholicism, Protestantism, Hoa Hao Buddhism, Caodaism, Muslim, etc.) or beliefs can fully enjoy the right” to FoRB in Vietnam.

On 29 October 2021, UN human rights experts called on Vietnam to immediately and unconditionally release Trang, saying that she was “only the latest victim of the authorities’ use of vaguely defined propaganda charges to persecute writers, journalists and human rights defenders, criminalising the exercise of their right to freedom of opinion and expression to share information.” They also said that “Bringing criminal charges against people who report on human rights issues is likely to coerce individuals into submission and silence, and preclude them from speaking out on such topics”. The UN’s Working Group on Arbitrary Detention had previously deemed Ms Pham Doan’s detention arbitrary in an Opinion 40/2021 adopted in September 2021.

CSW’s Founder President Mervyn Thomas said: “This nine-year sentence is outrageous; Pham Doan Trang is being targeted for her work peacefully promoting social justice and human rights in Vietnam. We concur with the conclusion of the UN human rights experts that Trang is one of many victims of the Vietnamese authorities’ use of vaguely defined propaganda charges, which effectively criminalise the exercise of the right to freedom of opinion and expression. We call on the Vietnamese authorities to drop all charges against Pham Doan Trang and to release her immediately and unconditionally. We further call on the government to release all those detained or imprisoned in retaliation for exercising their human rights or defending the rights of others, including the right to freedom of religion or belief. The US, EU, UK and other trade partners of Vietnam must raise this and similar cases directly with the government, and voice their support for Vietnamese human rights defenders both publicly and in private dialogues with the authorities.”