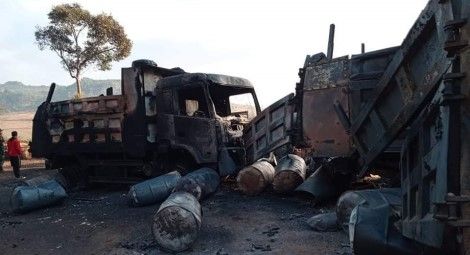 The site at which the bodies were discovered in Kayah State

CSW sources report that at least 35 civilians were burned alive by the Myanmar/Burma army (known as the Tatmadaw) on 24 December in Kayah (Karenni) State. Bodies of the victims, including elderly people and children, were discovered by the Karenni Human Rights Group (KHRG) on 25 December.

The killings took place near the Mo So village of Hpruso town and mark the latest atrocity to take place in Kayah State, with CSW sources also reporting the use of human shields and the placing of landmines around villages. According to the KHRG, at least 651 houses, 6 churches and at least one clinic in Kayah State were destroyed between 21 May and 20 December 2021.

Dr Sasa, Union Minister of the Ministry of International Cooperation, Spokesperson of the National Unity Government of Myanmar, and the Myanmar Special Envoy to the United Nations, condemned the recent killings in the “strongest possible terms” in a statement, writing: “these acts clearly constitute the worst crimes against humanity and we expect that all peoples and governments the world over should condemn these acts. With the condemnation, however, should come a commitment that these criminals be brought to justice and held fully accountable for their actions.”

Lethal and non-lethal attacks on citizens have targeted all segments of the population of Myanmar since the 1 February coup in which the Tatmadaw seized power, with military airstrikes particularly widely documented in Chin, Kayah, Karen and Kachin states.

Over the past week, the Tatmadaw has carried out air raids and artillery strikes on areas near Myanmar’s border with Thailand, with Al Jazeera reporting that over 4,200 people have been forcibly displaced to Thailand since the latest violence began. Civil society groups estimate the number of those displaced to be as high as 10,000.

Benedict Rogers, CSW’s Senior Analyst for East Asia and author of three books on Myanmar, said: “As many of us celebrate Christmas, the Tatmadaw has continued to perpetrate egregious violations against the people of Myanmar, burning innocent civilians alive and killing and displacing hundreds more in targeted attacks on the country’s ethnic and religious nationalities. We call once again for urgent international action, and specifically for the swift and comprehensive imposition of a global arms embargo on the country as a means of pressuring the military regime to bring an end to these horrific atrocities.”