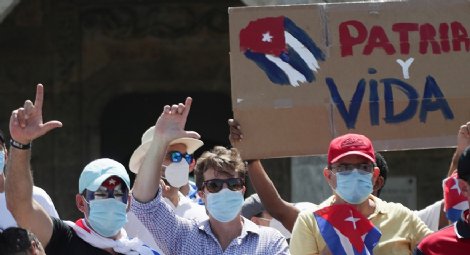 Cuban residents gather to protest against the Cuban government

From pandemic to protests: The struggle for freedom in Cuba

2021 was a significant year for Cuba. The handling of the COVID-19 pandemic, general repression and major shortages of food and other basics triggered a spontaneous wave of peaceful protests across the island in July. Cuba’s citizens united with cries of ‘homeland and life’ and ‘we are not afraid’.

The calls for freedom rang through communities in an unprecedented way since 1959. For the first time we witnessed Christians praying openly on the streets: the hope of change bursting forth.

Then came the crackdown…

President Miguel Díaz-Canel went on television and gave an ‘order to combat’, commanding all ‘revolutionaries’ to go out to reclaim the streets. Police and state security met the peaceful protestors with violence and detained or forcibly disappeared over 800 people. Church leaders were among those targeted – many were detained or disappeared’ by police and state security. Meanwhile the families of those detained faced pressure from authorities: families were evicted, or warned not to speak to human rights organisations like CSW, wives were fired from their jobs, children celebrated birthdays without their parents.

But we didn’t stay silent - and neither did you!

A wave of prayer, advocacy and campaigning

You rose up in an incredible way to stand with CSW in campaigning and praying for the church leaders detained in the protests and to support their families.

Thank you so much!

Over 4,000 of you have campaigned, demanding the release of Reverend Lorenzo Rosales Fajardo, who was violently arrested in the protests. At the time of writing, Pastor Lorenzo is being held in a maximum-security prison, where he has been beaten and assaulted. On 20 and 21 December, Pastor Lorenzo was put on trial, along with other was put on trial, along with other protesters. His wife, Maridilegnis described the trial as, ‘two days in which the truth did not prevail’. He is being targeted because he’s a church leader, and this case is part of a long-standing campaign against him that goes back to 2009, when his home, which was also where his church met, was confiscated.

But you have stood with him and his family when they needed it most. Thank you for continuing to stand up for justice, no matter how long it takes.

'I pray to God for each one of the people who fights tirelessly for the victims' rights and freedom, you are true heroes. I give thanks to every member of the CSW team for your support…’

The impact of our advocacy and campaigning

Although Pastor Lorenzo is still detained, the conditions in which he is being held have improved – in large part thanks to international advocacy, campaigning and, above all, prayer.

He is now permitted weekly visits or phone calls with his family, compared to only being allowed a handful of three-minute calls between August and October and being held completely incommunicado in July.

While we haven’t seen the victory of his unconditional release yet, we give thanks for the impact our advocacy, awareness-raising and campaigning have had:

Pastors Yéremi Blanco Ramírez and Yarian Sierra Madrigal were two of the church leaders you prayed for and encouraged in the aftermath of the protests. The two men were at the protests in Matanzas, when eyewitnesses reported police set dogs on Pastor Yarian, as he was filming violence being used against protestors. He was then violently detained, along with Pastor Yéremi.

The two men were detained incommunicado for two weeks, before being released into house arrest. Both have been fined for taking part in the protests, and have been warned that they will be imprisoned if they are involved in any future protests.

They sent us this message to thank you:

‘It's true that our family and friends were exposed to suffering because we were put in prison unjustly for 14 days for being in the protest that day… However, the difficult times we live in have been dimmed over the course of these months by the mercy God has shown us by reaffirming the friendship of many towards us and giving us new friends in different parts of the world. Today I received all these postcards that some brothers and sisters in the UK sent to cheer us up and let us know they are praying for us and our families. … God has wanted you to make our adversity a spring of joy.’

Thank you so much for praying for and encouraging Pastors Yéremi and Yarian - they are so grateful for your cards, prayers and support.

‘We started asking for international help and I want to thank you for all the support we received from you.’