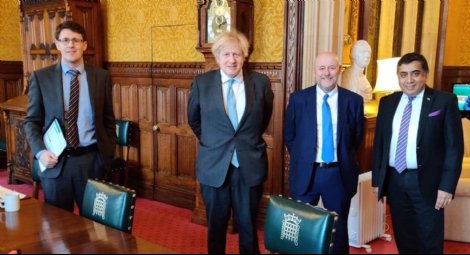 CSWs Founder President Mervyn Thomas, was delighted to be able to meet with the Prime Minister.

Promoting the right to freedom of religion or belief through advocacy interventions at the highest levels of Parliament is one of the many ways CSW has responded to the rising religious intolerance across South Asia in the last year - thanks to you.

Just before the COVID-19 pandemic hit the UK, we witnessed a rare moment at Prime Minister’s Question Time, when David Linden MP secured a meeting for himself and CSW with the Prime Minister to discuss religious freedom concerns in India.

The escalating situation in India was of particular concern to Mr Linden, and we are grateful for his commitment not to allow fundamental freedoms and rights to be overlooked in ‘our rush to do business’.

CSW’s Founder President Mervyn Thomas, was delighted to be able to meet with the Prime Minister, Mr Linden and Lord Ahmad of Wimbledon, Minister of State for South Asia.

Following this meeting, we were also asked to brief the India team at the Foreign Commonwealth and Development Office.

The resolution highlighted an ‘alarming increase’ in the number of accusations of blasphemy in Pakistan, the most reported since 1987, saying, ‘Pakistan’s blasphemy laws are increasingly used for personal or political score settling...’

Many allegations are aimed at journalists, human rights defenders, artists and those on the margins.

Thanks to your support, CSW has been speaking out about one of the root causes of religious intolerance in Pakistan – biased education policy – sending a letter demanding action from the Minister of State for South Asia and handing an evidence-based submission to the APPG on Pakistani Minorities. CSW’s reply from the Minister for South Asia re-stated his commitment that all UK funded programmes to Pakistan on education are inclusive and non-discriminatory.