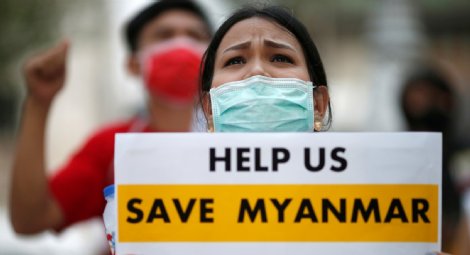 Myanmar: Campaigning in the aftermath of the coup

On 1 February, the Burma/Myanmar army seized power in a coup, declaring a year-long state of emergency and placing the country’s leader, Aung San Suu Kyi, and other civilian leaders under house arrest. The coup brought to an end a decade of civilian democratic rule which saw some limited positive political developments.

Since the coup, we’ve witnessed the devastation that the military crackdown has wrought across the country. Anti-coup protestors have regularly been met with a violent response by the military and police. More than 1,300 people have been killed, over 11,000 people have been arrested and military airstrikes have displaced more than 70,000 people. Many innocent civilians have been injured, or lost loved ones, and have lost everything they owned. A series of attacks on Christians and churches has killed innocent civilians and injured many more. In December 2021, ousted leader Aung San Suu Kyi was sentenced to two years in prison in the first of a series of verdicts on a total of 11 charges, which could result in her being imprisoned for life.

In response to the crisis in Myanmar, our advocacy team mobilised with urgent advocacy interventions calling for targeted sanctions and a global arms embargo. Our supporters echoed those calls in their campaigning.

Since the coup, CSW has:

• The UK and US imposed sanctions against Myanmar Economic Holdings Ltd (MEHL), owned by the military junta in Myanmar/ Burma.

• 119 countries supported a UN Resolution calling for the flow of arms to the military to be cut – a key ask of CSW’s advocacy and campaigning.