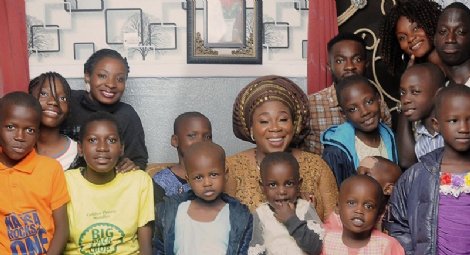 Nigeria: Fighting for the Du Merci children to be returned home

On Christmas Day 2019, as Mrs Tarfa was preparing Christmas lunch, armed policemen stormed the Du Merci orphanage in Kano, demanding Professor Tarfa and his wife come to the police station for interrogation.

Professor Tarfa was detained and informed days later he would be charged with illegally operating the Du Merci orphanages in Kano and Kaduna States, Nigeria, which he founded with wife.

Professor Tarfa was eventually charged with abducting children from their legal guardians and confining them in an unregistered orphanage.

He was subsequently remanded in custody on bail terms that appeared deliberately excessive, facing repeated delays and cancellations of bail review hearings. Meanwhile, 27 children were seized from the Du Merci orphanages and placed in a government-run home, where reports soon emerged of their maltreatment.

‘I, on behalf of Du Merci, want to appreciate the family of CSW for standing beside us…’

Our advocacy team lobbied key policymakers and UN special mechanisms to take action on the professor’s behalf. We also rallied 2,600 supporters across the world to email the Nigerian High Commissioner in London, urging that the Nigerian government should ensure Professor Tarfa’s release.

Professor Tarfa’s case was raised by MPs in parliamentary questions and debates, several members of the UK FoRB Forum called for official interventions on behalf of the professor and Du Merci children in a letter to the UK Foreign Commonwealth & Development Office, and a House of Lords Peer wrote directly to the Police Commissioner and the Attorney General of Kano State, as well as to the Nigerian High Commission in the UK.

As a result, The British High Commission in Abuja raised Professor Tarfa's case with the National Human Rights Commission of Nigeria and the Kano State authorities.

The UK Prime Minister's Special Envoy for FoRB also raised the case at a senior level within Nigeria’s Federal Government. Then, after almost a year in detention, Professor Tarfa was released on bail on 10 December 2020.

‘We danced with joy…’

Meanwhile, Professor Tarfa had embarked on 150 days of prayer and fasting.

On the 149th day, he was released on bail. And on the 150th, he and his wife Mercy held a party. ‘We danced for joy,’ he said. On 24 June 2021, a court in Kano acquitted Professor Tarfa of abducting children from their legal guardians and confining them in an unregistered orphanage.

We give thanks for this wonderful news but continue to support and speak up for the family, whose ordeal is not yet over.

At the time of writing, Professor Tarfa is awaiting the outcome of a further trial on an unjust forgery charge.

The five youngest Du Merci children who were separated from their siblings are still in a remote orphanage, and we are informed that ten who remain in the original orphanage embarked on a 21-day fast for deliverance on 5 December.

We will continue to pray and to call for justice with Professor Tarfa until his final acquittal, and all of the children are returned home.

More than 3,000 of you have campaigned on behalf of Professor Tarfa and his family, and so many have been praying over the last two years.

With your support, we have continued to be a voice for justice for the Professor and his family throughout their ordeal. Thank you.

‘Thanks for the wonderful work you and all the team in CSW have done and are still doing. You have no idea of the inestimable impact that you have made both spiritually, physically and materially.’