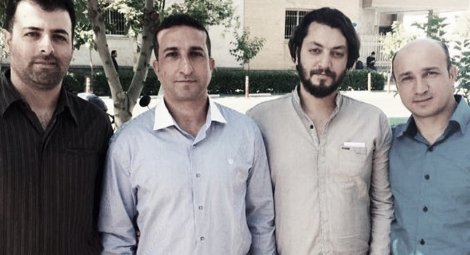 Answers to prayer in Iran

Imagine you and your close friends are worshipping at a gathering in your home when you hear a bang on the front door and muffled voices. You look around the room hoping to find a hiding place, but you hear footsteps coming down the hallway. It’s already too late... This is what happened at a church meeting in Rasht, northern Iran, when secret police raided the house at which it was being held.

Two of three church leaders at this meeting were arrested, then released two weeks later on bail of around £69,000. Morteza Mashhoudkari and Ahmad Sarparast were held at a secret location before their release. The third Christian, Ayoub Pourrezade, was released on bail 12 days later. He was placed in solitary confinement at Lakan prison for cross examination about church finances.

Although CSW is celebrating their releases, unfounded charges against the men are yet to be dropped.

Christians in the northern city of Rasht have faced intense harassment by the Iranian authorities for several years, and these arrests are emblematic of the regime’s effective criminalisation of Christianity and other minority religious faiths.

Supreme Court orders the review of sentences of imprisoned Christians

In November 2021, the Supreme Court ordered a review of the five-year sentences that were previously handed down to Pastor Matthias Haghnejad and eight other Christian converts.

‘CSW welcomes the judges’ affirmation that proselytising and establishing home churches are not illegal activities, and the prospect that the case against these Christians will be reviewed.’

The Supreme Court judges stated that they did not consider proselytising and establishing house churches to be illegal activities. The converts had been convicted of ‘endangering state security’ and ‘promoting Zionism’, but it appears the real reason for their imprisonment was their conversion to Christianity. The Supreme Court also stated that establishing home churches and proselytising are not illegal activities.

A CSW source said: ‘Some judges refuse to take orders from the secret police. This new development does not necessarily mean that they will be released but probably there will be a new trial.’

We give thanks for this encouraging development, and continue to pray for the release and acquittal of all nine men.

A ray of hope shines for imprisoned church leader Yousef Nadarkhani, thanks to a UN finding. The UN Working Group on Arbitrary Detention is asking the Iranian Government for the urgent release of the pastor, who it describes as ‘a target of religious discrimination’. Pastor Nadarkhani was sentenced to ten years in prison for ‘acting against national security’ by promoting Zionist Christianity.

The pastor was arrested with four other Christians in 2016 during raids on homes in Rasht. Although they were released on bail pending their appeal, they were re-arrested in 2018. After appealing, Pastor Nadarkhani’s term was reduced to six years.

CSW has regularly raised Pastor Nadarkhani’s case with UN experts, and we continue to campaign for his release and for all charges against him to be dropped.

‘This is an answered prayer, and we are grateful to CSW, Freedom Now and all those working on Pastor Nadarkhani’s case for so long.’

Your prayers make a difference!

Thank you for partnering with us in prayer and campaigning for Pastor Nadarkhani, Matthias Haghnejad and all others imprisoned in Iran. Although we are yet to see the final victory in all of these cases, we give thanks for the answers to prayer that we have witnessed during 2021, which have fuelled our faith for even greater victories.