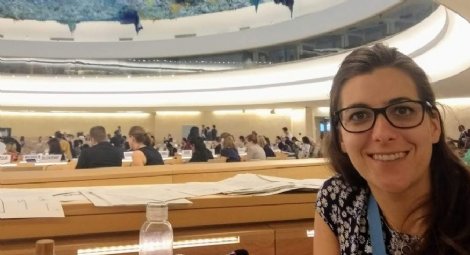 Four years at the UN: Calling the world to action

On 19 April 2017, CSW became the first organisation with a sole focus on freedom of religion or belief for all to be granted official United Nations accreditation. We have what is known as Consultative Status, thanks to our specialist expertise.

This was a huge boost for CSW: a vote of confidence in us as an organisation, as well as opening the doors to key advocacy platforms at the UN. Four years on, how have we made use of this valuable accreditation?

Gaining UN accreditation was a struggle in itself. After eight years of deferrals, it was finally granted by the UN’s Economic and Social Council (ECOSOC), following an appeal process, after our status was rejected by the UN Committee on Non-Governmental Organisations. The accreditation process was made so difficult because the committee responsible for accrediting NGOs included some of the countries we work on, whose governments naturally wanted to stop CSW from exposing their human rights violations at every opportunity. But we persevered because we know that freedom of religion or belief is a right worth protecting; it must be recognised as a priority by policymakers at the UN. We are thankful that the appeal was successful, and are grateful for the support we received from the UK Mission to the UN in New York, and others, along the way.

What have we achieved since gaining Consultative Status?

‘Success can be hard to measure at the UN because so much of what we do is about being committed to the long-haul,’ says UN Officer, Claire Denman. ‘Government systems rarely change for the better overnight.’

However, one measure of success would be the amount of consistent reporting on freedom of religion or belief we have been able to do through the mechanisms of the UN.

Between April 2017 and October 2021, CSW representatives have actively participated in every session of the UN Human Rights Council – even through the COVID-19 pandemic. Since gaining UN accreditation, we have delivered 129 oral statements and submitted 22 written statements, organised 13 side events, and raised over 23 cases of concern with the UN Special Procedures, and in 2021 alone, we participated in three emergency meetings of the Human Rights Council.

In addition, CSW has made20 submissions to the Universal Periodic Review (UPR) and engaged with seven treaty body reviews of states. Each of these figures represents an opportunity for people in power to hear the voices of victim-survivors and for CSW to raise critical concerns regarding the right to freedom of religion or belief.

Although we may not always see the long-term change we desire in every case or country, each interaction at the UN helps build momentum and is a vital step on the journey to freedom.

One of Claire’s highlights has been using our status to amplify the voices of those suffering for their faith, especially being able to bring individuals to the UN to speak first-hand about their experiences. ‘For me, it’s one of the most powerful ways we can use our consultative status.’

It is also hugely encouraging to see CSW’s expertise and credibility recognised by numerous actors engaging with the UN. CSW has been called upon to join panel discussions to speak specifically into the situation for freedom of religion or belief minorities alongside other rights experts, and in 2021 , we were the first specialist NGO to be featured in a social media campaign by the UK Mission to the UN, which allowed thousands more people to hear about what we do.

There are many more ways our accreditation has enabled us to advance our work, although not every achievement can be shared publicly. But our team is working tirelessly to make use of every opportunity to protect, promote and uphold the right to freedom of religion or belief on the international stage.

In the years to come, we hope and pray that our calls for change will result in more concrete action from people in power – especially regarding China, where the UN has been slower to act. Until then, Claire says: ‘We will roll up our sleeves and continue the work.’