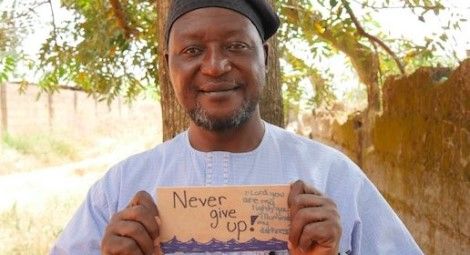 Journalist and spokesperson for the Southern Kaduna Peoples Union (SOKAPU), Luka Binniyat, was released from prison on 3 February, after succeeding in meeting challenging bail terms stipulated by a Federal High Court in the capital of Nigeria’s Kaduna state.

Mr Binniyat was arrested on 4 November 2021 in connection with an article he had written criticising the Kaduna state government’s inadequate response to attacks on communities in southern Kaduna in September 2021. He is accused of defaming Samuel Aruwan, the Kaduna State Commissioner for Internal Security, in a comment attributed to the Senator for Kaduna South, Danjuma La’ah, who subsequently denied making it.

After repeated delays, on 27 January Mr Binniyat finally appeared before a High Court in Kawo with jurisdiction over the charges levelled against him. He pleaded not guilty to the charges of cyberstalking and aiding and abetting the offences of cybercrime, was formally arraigned, and was granted bail in the sum of N1million (approximately £1,800 GBP) along with the provision of two sureties with the same amount who resided in Kaduna state and possessed properties covered by certificates of ownership.

However, Mr Binniyat’s release was delayed by challenges in meeting the court’s stipulation that the certificates of ownership had to have been acquired or recertified during the tenure of the current governor, Nasir el Rufai.  Once these were secured, the documents had to be verified by the Kaduna Geographic Information System, then by the Ministry of Justice, before being returned to the court.

Mr Binniyat was eventually freed on the afternoon of 3 February, 90 days after being detained initially. His trial will commence on 28 February.

This was the second time Mr Binniyat had been detained arbitrarily. In 2017 he was arrested and charged in connection with an article based on information which was later found to be false, and for which he publicly apologised, after making strenuous efforts to retract it prior to publication. After many adjournments and lengthy gaps between hearings, he was released on bail after spending 96 days in detention.

CSW’s Founder President Mervyn Thomas said: “CSW is pleased to learn Mr Binniyat is finally reunited with his family. As his trial looms, we encourage diplomatic missions in Nigeria, and particularly the United Kingdom, United States and European Union, to monitor the proceedings in order to ensure due process is observed.  We urge the Kaduna state authorities to review and revise the use of extended pre-trial maximum security detention for non-violent suspects who are accused of committing bailable offences. In light of renewed attacks in southern Kaduna, we reiterate our appeal for the state government to prioritise the arrest and prosecution of genuine instigators and perpetrators of violence, while ensuring protection for all citizens. We also reiterate our appeal to members of the international community to maintain close scrutiny on the situation of the human rights crisis in Kaduna state, raising issues of concern with the Nigerian government whenever necessary and assisting in addressing the violence in every possible manner.”