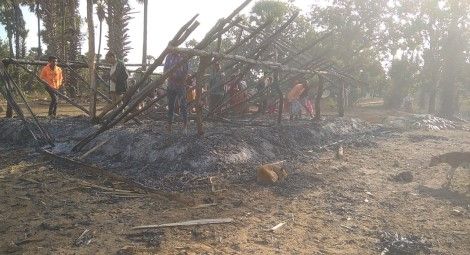 Remnants of the burned down church

Church in Chhattisgarh burnt down

A church built by members of a scheduled tribe in Kistaram village, Chhattisgarh state, India was burnt down in the early hours of 5 February, in an attack in which villagers allege the Station House Officer (SHO) of the Kistaram Police Station was complicit.

CSW sources report that SHO Bhavesh Shinde visited the church at 11am on 3 February and asked the Christians to stop praying in the premises. He allegedly told them that he didn't like their prayers and threatened to falsely implicate them with Naxalites (far left radical communists, who have been in constant conflict with the government of India over land rights) if they didn't stop praying there.

On 4 February the SHO reportedly called two villagers, named Deva (35) and Kadthi Santhosh (26), to the police station and allegedly asked them to set fire to the church. However, they reportedly refused to do so, and were subsequently insulted and threatened with being falsely implicated with Naxalites. O

At approximately 3am on 5 February, the church was burnt down. Later that day, the SHO reported the incident to church members Thurram Kanna and Kadti Gurva, who owned the land, and two other members of the church. The SHO allegedly smiled as the incident was being reported and warned them that they would be sent to jail if they prayed there again. Mr Kanna and Mr Gurva have filed affidavits in support of their allegations.

The church, which had a thatched roof, was built five months ago. An estimated 100 people attended prayer meetings and Bible studies there regularly.

On 5 February, the Chhattisgarh Christian Forum (CGCF) president, Arun Pannalal, made enquiries of the SHO about the church burning, which he denied had taken place. The villagers had reportedly asked the SHO to file a First Information Report (FIR), which is required for the police to open up an investigation, however he allegedly refused to do so and would not even note the villagers’ complaints.

On 7 February, a delegation of CGCF and local Christians met the Director General of Police and submitted a memorandum asking for an inquiry and suspension of the SHO. On 8 February, they met with the Human Rights Commission and the Minorities Commission to submit a memorandum.

CSW's Founder President Mervyn Thomas said: “We urge both Chhattisgarh state and central government authorities to conduct an independent and impartial investigation to ensure that all perpetrators of this crime, including any police officers who may be complicit, are brought to justice. We also call for the victims to be fully compensated for the loss that they have suffered, and to be provided with alternative arrangements for them to practice their religion freely. The state must also ensure that this community will not be subjected to fear and intimidation in the future."